Made up languages, Spoken word 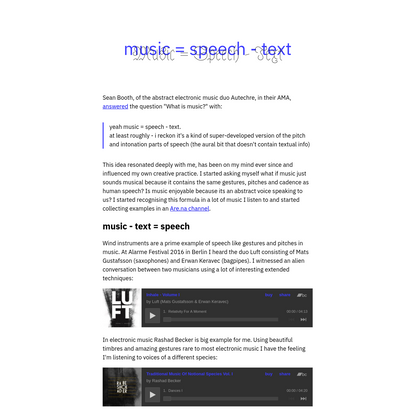 Sean Booth, of the abstract electronic music duo Autechre, in their AMA, answered the question "What is music?" with:

yeah music = speech - text.
at least roughly - i reckon it's a kind of super-developed version of the pitch and intonation parts of speech (the aural bit that doesn't contain textual info)

This idea resonated deeply with me, has been on my mind ever since and influenced my own creative practice. I started asking myself what if music just sounds musical because it contains the same gestures, pitches and cadence as human speech? Is music enjoyable because its an abstract voice speaking to us? I started recognising this formula in a lot of music I listen to and started collecting examples in an Are.na channel.

Wind instruments are a prime example of speech like gestures and pitches in music. At Alarme Festival 2016 in Berlin I heard the duo Luft consisting of Mats Gustafsson (saxophones) and Erwan Keravec (bagpipes). I witnessed an alien conversation between two musicians using a lot of interesting extended techniques:

In electronic music Rashad Becker is big example for me. Using beautiful timbres and amazing gestures rare to most electronic music I have the feeling I'm listening to voices of a different species:

Through James Gleick's book The Information (can recommend!) I learned about talking drums. These drums sound like humans humming and can be used to mimic speech to relay messages up to 10 kilometres! Music can be a means of telecommunication as well a deciphered way of text. Here's one example of vocals turned into percussion which I love, it starts 1:15.

A concept explored by quite some dadaists. In Spain I saw an exhibition of the experimental writer José Luis Castillejo. A couple of his works a books containing poems written with a single or a couple of letters, like the Book of I's or Book of J's. There are a couple of my favs: 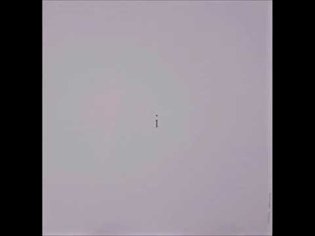 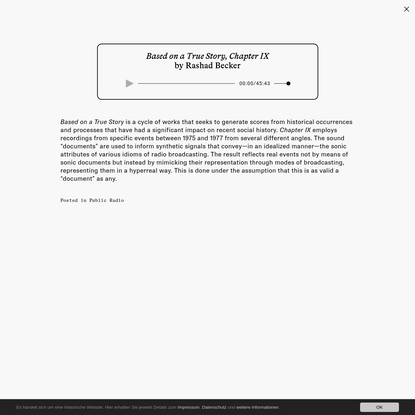 Based on a True Story, Chapter IX 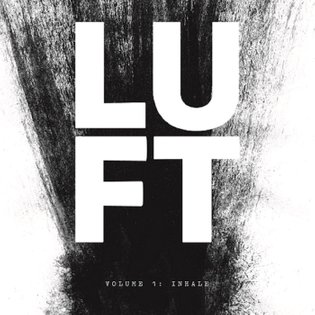 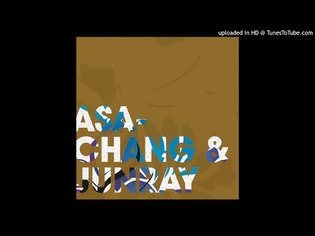 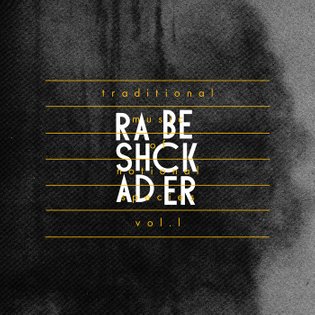 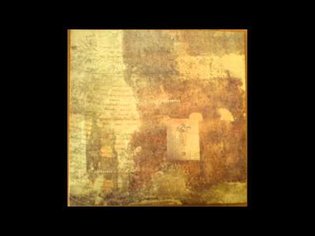