I chose to look at a lens called "Animal Superpowers" made in 2008 by Chris Woebken and Kenichi Okada. They created multiple lenses/devices that could be worn by users to simulate different senses through more animal perspectives. Such devices include an ant apparatus that allows viewers by wearing head and hand gear to see through vision that is magnified 50 times. Another is a giraffe device that is headwear that allows users to raise their view by 30cm to change one's perspective to new heights, quite literally. I image after wearing these devices for awhile, the user's perception of the world around them could be warped into something new. 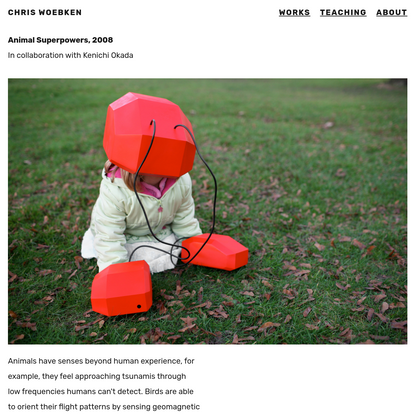