Sign up or Log in
Are.na
julie ✧*:･ﾟ
this existence
Info
—
56 Followers
This channel appears in
⚙️ life resource well, heart moving // on beautiful things, being mortal, channel surfing, journal , heal the body 🫁, in this strange world, nothing matters, so everything does, and love and lust and an infinity in prosperity
View
Grid
Table 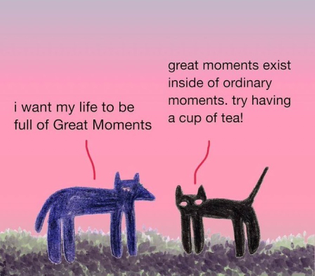 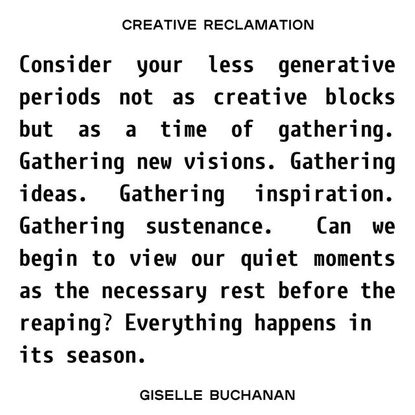 “It never occurred to me that our lives, until then so closely interwoven, could unravel and separate over a thing like that. But the fact was, I suppose, there were powerful tides tugging us apart by then, and it only needed something like that to finish the task. If we'd understood that back then-who knows?-maybe we'd have kept a tighter hold of one another.”
― Kazuo Ishiguro, Never Let Me Go

"...you will never be self-sufficient or independent. Because nothing living is."
Ross Gay

nothing living is self-sufficient, ross…

My name is Sinead O'Connor. I am learning to love myself. I am deserving. I deserve to be treated with respect. I deserve not to be treated like dirt. I deserve to be listened to. I am a member of the human race. I deserve not to be hurt. My name is Sinead O'Connor. I am a woman. I have something to offer. I am and have always been carrying a lot of grief for my lost childhood. And for the effects of its horror and violence on my life. I am grieving the loss of my mother and father. I am grieving the loss of my brothers and sister. The division of my family. The loss of my SELF. My own inner child Who is really me. (Remember you do not know me). Who was tortured and abandoned and spat at and abused. Who has been beaten naked until she was bruised. Who has grown up with no sense of self-esteem. No sense of trust. No ability to be intimate and who therefore is in very great pain which needs to be looked at and worked through and expressed. So that I can be free of its effects on my life. Which are many and varied. I have been experiencing the need to be held. Which I have realized Is the governor of all my behaviours. Both productive and destructive. This is why I didn't show up on Saturday... I find it hard to be myself. To show my feelings. To get to the joy I need to release the pain which is blocking me. If I don't do this I will not survive. If I don't do this I'll never be the singer I am capable of being if only I can love myself. If only I can fight off the voices of my parents and gather a sense of self-esteem. Then I'll be able to REALLY sing. Which is what I want more than anything else in the world. Recovery has always been my only goal. I have used my voice in every way. It is my life. The only thing I put even before my son. I've run away from the pain of not having been held For all my life. Until now. And when the feelings of loss came up this time I decided not to run away but to go with them. Feel them and release them So as to be free of them. I had to be myself. I couldn't deal with being Sinead O'Connor'' for the day. I have become very self-conscious and frightened as a result of beingfamous'' One doesn't see one's self reflected in the mirror. I lost my Self. I cannot sing until I'm ready to be myself. And here's how you could help. Stop hurting me please. Saying mean things about me. I've been in public since I was only twenty. Still a very sad baby. But I could sing then because I wasn't frightened. I know I've been angry but I'm full of love really do you think you could stop hurting me? It is suffocating me. Please? It's an accident that I got famous''. But I think it proves that there are a lot of people out there like me. It is their pain, which they hear and see also in me ?- being expressed which made them respond to that song or to my songs or my voice. I represent a group of people. Adult-Children we are called. Those of us who have lost our childhoods. We make up 96% of the human race believe it or not. We are in very great pain. Which if it is to be healed must be expressed Or we will continue to turn our grief inwards as we do until it becomes anger and we self-destruct. The ways in which we do that are also many and varied! What goes on in the sitting room goes on in the public arena. War in Tibet, war in Africa, war in Ireland, war in Bosnia. Do you know that the Serbian leader's parents killed themselves when he was only a nipper. And he isacting out'' the rage and grief he has never dealt with. I swear to you that this is true. What have the other leaders been through? I've trying to give this information. Because I know it can help the whole human situation. I was angry before I was frightened. I know if you could really listen you'd see that we do not know what we are doing. When we mock the expression of human feeling. When we scoff at the sound of our children's keening. There is a mirror into which we are not looking.

Sinead's Letter in THE IRISH TIMES '90 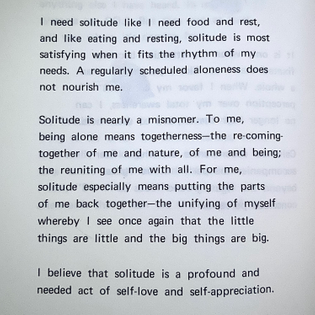 “Document the moments you feel most in love with yourself - what you’re wearing, who you’re around, what you’re doing. Recreate and repeat.” ― Warsan Shire

Everybody knows that really intimate conversation is only possible between two or three. As soon as there are six or seven, collective language begins to dominate.

Often, when we say, “I love you” we focus mostly on the idea of the “I” who is doing the loving and less on the quality of the love that’s being offered. This is because we are caught by the idea of self. We think we have a self. But there is no such thing as an individual separate self. A flower is made only of non-flower elements, such as chlorophyll, sunlight, and water. If we were to remove all the non-flower elements from the flower, there would be no flower left. A flower cannot be by herself alone. A flower can only inter-be with all of us… Humans are like this too. We can’t exist by ourselves alone. We can only inter-be. I am made only of non-me elements, such as the Earth, the sun, parents, and ancestors. In a relationship, if you can see the nature of interbeing between you and the other person, you can see that his suffering is your own suffering, and your happiness is his own happiness. With this way of seeing, you speak and act differently. This in itself can relieve so much suffering.

| Thich Nhat Hanh, How to Love

The relationship to the world that modern science fostered and shaped now appears to have exhausted its potential. It is increasingly clear that, strangely, the relationship is missing something. It fails to connect with the most intrinsic nature of reality, and with natural human experience. It is now more of a source of disintegration and doubt than a source of integration and meaning. It produces what amounts to a state of schizophrenia, completely alienating man as an observer from himself as a being. Classical modern science described only the surface of things, a single dimension of reality. And the more dogmatically science treated it as the only dimension, as the very essence of reality, the more misleading it became. Today, for instance, we may know immeasurably more about the universe than our ancestors did, yet it increasingly seems that they knew something more essential about it than we do, something that escapes us. The same is true of nature and of ourselves. The more thoroughly all our organs and their functions, their internal structures, and the biochemical reactions that take place within them are described, the more we seem to fail to grasp the spirit, purpose, and meaning of the system that they create together and that we experience as our unique “self.”