Silence is not the absence of something but the presence of everything.

When feeling complexity, notice the layers. A layer of the emotions, of the story, of another's emotions and story, and underneath it all - a watcher. Paradoxically detached and engaged. Notice the choice of perspectives available.

One of the functions of art is to give people the words to know their own experience. There are always areas of vast silence in any culture, and part of an artist’s job is to go into those areas and come back from the silence with something to say. It’s one reason why we read poetry, because poets can give us the words we need. When we read good poetry, we often say, ‘Yeah, that’s it. That’s how I feel.

it is troubling how many people expect applause, recognition, when they have not even begun to learn an art or a craft. Instant success is the order of the day ... I wonder whether this is not part of our corruption by machines. Machines do things very quickly and outside the natural rhythm of life ... So the few things that we still do, such as cooking, knitting, gardening, anything at all that cannot be hurried, have a very particular value.

Journal of A Solitude by May Sarton

"It was totally enforced, 27 years of his life, his most active adult life, in solitude. And yet he’s the kind of person who, rather than just becoming lonely and depressed, which I suspect would’ve been a very reasonable way of reacting to that incarceration, he saw it as an opportunity. And what he discovers in the silence and the solitude is the power of words and how powerful words are, because this is what he’s been cut off from, is the capacity to be able to speak. And rather than just feel frustrated and limited, he reflects back on how valuable words are in being able to address people’s real needs and concerns. And so he seems to have transformed that imprisonment, at least at one level, into a deeper resource within himself.

And I think when he is released from jail, and you hear him speak, there’s a gravity and a maturity and a depth. And it almost doesn’t really matter, almost, what he says. There’s something in his tone of voice, something in his whole being that has been nurtured and enriched, it appears, from this long period of enforced solitude and reflection.

This is Mandela: he says, “It is never my custom to use words lightly. If 27 years in prison have done anything to us, it was to use the silence of solitude to make us understand how precious words are and how real speech is in its impact upon the way people live and die.”

The silence that strips bare: [...] / If there were a poetry where this could happen / not as a blank space or as words / stretched like a skin over meanings / but as silence falls at the end / of a night through which two people / have talked till dawn

Cartographies of Silence by Adrienne Ri… 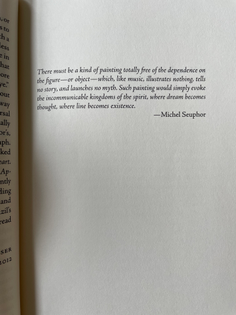 “The ‘freedom’ frees itself from the slavery of the word”

“The true thought seems to have no author. And beatitude has that same quality. Beatitude starts in the moment when the act of thinking has freed itself from the necessity of form. Beatitude starts at the moment when the thinking - feeling has surpassed the author’s need to think — he no longer needs to think and now finds himself close to the grandeur of the nothing. The true incommensurability is the nothing, which has no barriers and where a person can scatter their thinking - feeling.”