Our differences are polarities between which can spark possibilities for a future we cannot even now imagine, when we acknowledge that we share a unifying vision, no matter how differently expressed; a vision which supposes a future where we may all flourish, as well as a living earth upon which to support our choices. We must define our differences so that we may someday live beyond them, rather than change them.
—From “Difference and Survival” 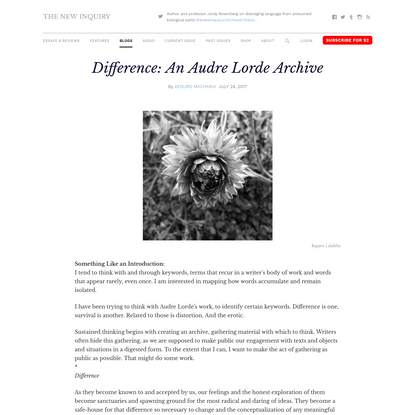 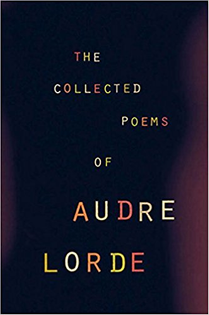 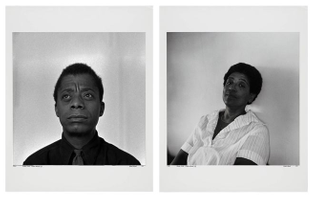 Lorde focused her discussion of difference not only on differences between groups of women but between conflicting differences within the individual. "I am defined as other in every group I'm part of," she declared. Audre Lorde states that "the outsider, both strength and weakness. Yet without community there is certainly no liberation, no future, only the most vulnerable and temporary armistice between me and my oppression".[30]:12–13 She described herself both as a part of a "continuum of women"[30]:17 and a "concert of voices" within herself.[30]:31

Her conception of her many layers of selfhood is replicated in the multi-genres of her work. Critic Carmen Birkle wrote: "Her multicultural self is thus reflected in a multicultural text, in multi-genres, in which the individual cultures are no longer separate and autonomous entities but melt into a larger whole without losing their individual importance."[31] Her refusal to be placed in a particular category, whether social or literary, was characteristic of her determination to come across as an individual rather than a stereotype. Lorde considered herself a "lesbian, mother, warrior, poet" and used poetry to get this message across.[32]

the sun and moon and forever hungry
the sharpened edge
where day and night shall meet
and not be
one.

Excerpt from the poem by Audre Lorde, “…

Advocating the mere tolerance of difference between women is the grossest reformism. It is a total denial of the creative function of difference in our lives. Difference must be not merely tolerated, but seen as a fund of necessary polarities between which our
creativity can spark like a dialectic. Only then does the necessity for interdependency become unthreatening. Only within that interdependency of difference strengths, acknowledged and equal, can the power to seek new ways of being in the world generate,
as well as the courage and sustenance to act where there are no charters.
https://collectiveliberation.org/wp-content/uploads/2013/01/Lorde_The_Masters_Tools.pdf