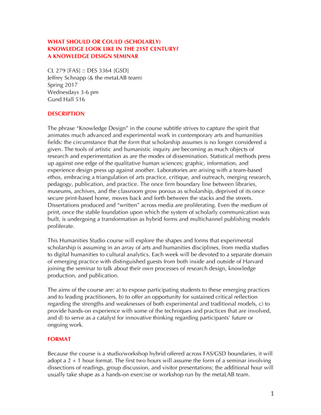 So, I'm going to start off with a semi-ridiculous analogy: Information is the raw material that makes up knowledge. In other words, knowledge is mined from information. In this analogy, "tools" are what we use to convert raw information into knowledge.

Knowledge-oriented tools are concerned with the capture, generation, packaging, dissemination, transformation, refining, repackaging, usage, storage, communication, protection, and presentation of information in any possible manner. It is through these stages that knowledge is mined from information.

Knowledge management as a field, has always had a strong association with a kind of organization that has an imposed structure. Or to be more specific, the word management, implies that at some point, the individual or the organization practicing knowledge management will at some point be more or less in control of the knowledge. The danger here is imposing too much structure onto a process that is inherently structure-less: which is thinking.

Which brings me to my main point: of all the stages that knowledge management is concerned with, knowledge generation and knowledge transformation are the stages that are most left wanting, at least in terms of tools. All of the other stages are at least somewhat solved for, but the generation and transformation remain the most mysterious, and the most firmly in the realm of the human brain. Another way to frame this idea is "tools for thinking".

There is a long history of proposals for tools that could potentially augment human thinking and intelligence and I want to focus on one of them.

In 1945, Vannevar Bush published his famous essay "As We May Think", in the Atlantic In it, he dreamed up a machine called the Memex (a portmanteau of “memory” and “index), which would serve as both the catalog and whiteboard for manipulating all human knowledge. The Memex was a device not only for holding and displaying information, but one that allowed the user to create paths between documents that could be stored and retrieved. A Memex user could have two documents open at once: one for reading and annotating information, and one for looking through related documents that came to mind as the user researched. While exploring connections between documents, the user would use the Memex to permanently associate them, creating a link between the documents so that one item would immediately retrieve its linked partner upon reading.

I'm going to read a passage from "As We May Think" verbatim, so we can start to think about what operating the Memex would look like in practice:

As We May Think:

> The owner of the memex, let us say, is interested in the origin and properties of the bow and arrow. Specifically he is studying why the short Turkish bow was apparently superior to the English long bow in the skirmishes of the Crusades. He has dozens of possibly pertinent books and articles in his memex. First he runs through an encyclopedia, finds an interesting but sketchy article, leaves it projected. Next, in a history, he finds another pertinent item, and ties the two together. Thus he goes, building a trail of many items. When it becomes evident that the elastic properties of available materials had a great deal to do with the bow, he branches off on a side trail which takes him through textbooks on elasticity and tables of physical constants. He inserts a page of longhand analysis of his own. Thus he builds a trail of his interest through the maze of materials available to him.

> And his trails do not fade. Several years later, his talk with a friend turns to the queer ways in which a people resist innovations, even of vital interest. He has an example, in the fact that the outraged Europeans still failed to adopt the Turkish bow. In fact he has a trail on it. A touch brings up the code book. Tapping a few keys projects the head of the trail. A lever runs through it at will, stopping at interesting items, going off on side excursions. It is an interesting trail, pertinent to the discussion. So he sets a reproducer in action, photographs the whole trail out, and passes it to his friend for insertion in his own memex, there to be linked into the more general trail.

So the three big things that the memex had to do was: 1. index a vast amount of information, 2. provide easy ways for the operator to access that information, and 3. allow the operator to make permanent associative branching trails with portions of the information. Thanks to the Internet, the Web, HTML, and search rank algorithms, 1 and 2 are pretty well solved for. The big barrier to number 3 is not at all a technological, it's cultural. In other words, nothing is really stopping any of us from taking the kinds of steps outlined in "As We May Think" (and for people who use Are.na, this is especially true), other than deciding that we want to indulge in an impulse to follow our own curiosity.

So, in the interest of time, I'll leave it here with a question:

What are the kinds of KM tools that can promote us (as humans) to be more naturally curious? (they don't have to be digital) 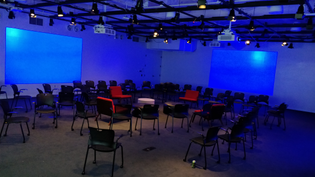 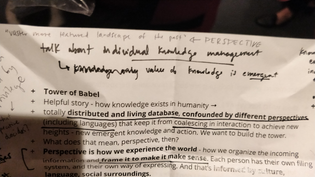 "vaster more textured landscape of the …

I think it’s productive to think about the intentional presentation of someone’s perspective or lens, versus a passive presentation that happens unintentionally when platforms reveal pieces of our selves via algorithms, et cetera

There’s no mutual relationship implied in Google’s mission, for example, which is a canonical perspective. But now we have a social web. The challenge now, when we have all this knowledge rich with perspective, how do we pierce through perspective and get to the moment where two people can come up with new knowledge by combining perspectives. – Sally

Historically we’ve had institutions to bring people together and make that happen. Whether it was courts or universities, etc, where institutional collection of knowledge was collected from parts of a distributed database. But what’s lost when we institutionalize knowledge is the texture of individual perspectives. Like Ida said, there’s this vaster, more textured landscape of the past. – Sally 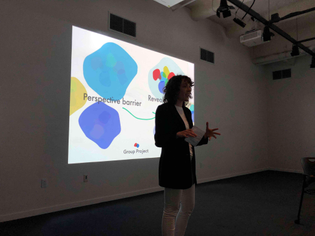 Babel - an metaphor for a distributed d…

Part of why computers are good is that they don’t align with our thought process. Part of the excitement of Google search is what else you’ll find while looking for a specific piece of knowledge. Working back into your knowledge base through the action of searching is a way to accrue new knowledge.