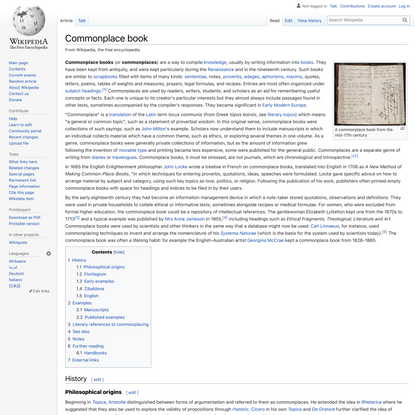 “You’re obliged to pretend respect for people and institutions you think absurd. You live attached in a cowardly fashion to moral and social conventions you despise, condemn, and know lack all foundation. It is that permanent contradiction between your ideas and desires and all the dead formalities and vain pretences of your civilization which makes you sad, troubled and unbalanced. In that intolerable conflict you lose all joy of life and all feeling of personality, because at every moment they suppress and restrain and check the free play of your powers. That’s the poisoned and mortal wound of the civilized world.”

“It is not the amount of knowledge that makes a brain. It is not even the distribution of knowledge. It is the interconnectedness."

Maintenance and Care
by Roberto Greco
228 blocks • 7 days ago

How we spend our days is, of course, how we spend our lives. What we do with this hour, and that one, is what we are doing. A schedule defends from chaos and whim. It is a net for catching days. It is a scaffolding on which a worker can stand and labor with both hands at sections of time … Each day is the same, so you remember the series afterward as a blurred and powerful pattern.

“Make your interests gradually wider and more impersonal, until bit by bit the walls of the ego recede, and your life becomes increasingly merged in the universal life.”

The carbon inside you could have existed in any number of creatures or natural disasters before finding you. That particular atom residing somewhere above your left eyebrow? It could well have been a smooth riverbed pebble before deciding to call you home. You are rock and wave and the peeling bark of trees, you are ladybirds and the smell of a garden after the rain. MA — The Japanese Concept of Space and …

We want too much content, too fast, and it just leads to this endless algorithmic churning, this paint-by-numbers effect. You see it in art. In Netflix documentaries. Spotify playlists. Op-ed pages. The news. The latest manufactured outrage. Well-reviewed first-person novels about nothing. All so dreadfully banal and repetitive. This is what results when everything is forged in economies of dollars, of ether, of attention. Most culture now has the feeling of having been made by algorithm; and the reason for this, is that humans have begun to act like algorithms.

[] from THE DOWNWARD SPIRAL: POPULAR THINGS by Dean Kissick

from THE DOWNWARD SPIRAL: POPULAR THING…

“What speaks to us, seemingly, is always the big event, the untoward, the extra-ordinary: the front-page splash, the banner headlines. Railway trains only begin to exist when they are derailed, and the more passengers that are killed, the more the trains exist. Aeroplanes achieve existence only when they are hijacked. The one and only destiny of motor-cars is to drive into plane trees. Fifty-two weekends a year, fifty-two casualty lists: so many dead and all the better for the news media if the figures keep going up! Behind the event there is a scandal, a fissure, a danger, as if life reveals itself only by way of the spectacular, as if what speaks, what is significant, is always abnormal: natural cataclysms or social upheavals, social unrest, political scandals.

In our haste to measure the historic, significant and revelatory, let’s not leave aside the essential: the truly intolerable, the truly inadmissible. What is scandalous isn’t the pit explosion, it’s working in coalmines. ‘Social problems’ aren’t ‘a matter of concern’ when there’s a strike, they are intolerable twenty-four hours out of twenty-four, three hundred and sixty-five days a year.

Tidal waves, volcanic eruptions, tower blocks that collapse, forest fires, tunnels that cave in, the Drugstore de Champs-Elysées burns down. Awful! Terrible! Monstrous! Scandalous! But where’s the scandal? The true scandal? Has the newspaper told us everything except: not to worry, as you can see life exists, with its ups and downs, things happen, as you can see.
The daily newspapers talk of everything except the daily. The papers annoy me, they teach me nothing. What they recount doesn’t concern me, doesn’t ask me questions and doesn’t answer the questions I ask or would like to ask. What’s really going on, what we’re experiencing, the rest, all the rest, where is it? How should we take account of, question, describe what happens every day and recurs everyday: the banal, the quotidian, the obvious, the common, the ordinary, the infra-ordinary, the background noise, the habitual?

To question the habitual. But that’s just it, we’re habituated to it. We don’t question it, it doesn’t question us, it doesn’t seem to pose a problem, we live it without thinking, as if it carried within it neither question nor answers, as if it weren’t the bearer of any information. This is not longer even conditioning, it’s anaesthesia. We sleep through our lives in a dreamless sleep. But where is our life? Where is our body? Where is our space?

How are we to speak of these ‘common things’, how to track them down rather, how to flush them out, wrest them from the dross in which they remain mired, how to give them a meaning, a tongue, to let them, finally, speak of what is, of what we are. What’s needed perhaps is finally to found our own anthropology, one that will speak about us, will look in ourselves for what for so long we’ve been pillaging from others. Not the exotic anymore, but the endotic.

To question what seems so much a matter of course that we’ve forgotten its origins. To rediscover something of the astonishment that Jules Verne or his readers may have felt faced with an apparatus capable of reproducing and transporting sounds. For the astonishment existed, along with thousands of others, and it’s they which have moulded us.

What we need to question is bricks, concrete, glass, our table manners, our utensils, our tools, the way we spend our time, our rhythms. To question that which seems to have ceased forever to astonish us. We live, true, we breathe, true; we walk, we open doors, we go down staircases, we sit at a table in order to eat, we lie down on a bed in order to sleep. How? Why? Where? When? Why?
Describe your street. Describe another street. Compare.
Make an inventory of you pockets, of your bag.

Ask yourself about the provenance, the use, what will become of each of the objects you take out.
Question your tea spoons.
What is there under your wallpaper?
How many movements does it take to dial a phone number?
Why don’t you find cigarettes in grocery stores? Why not?

It matters little to me that these questions should be fragmentary, barely indicative of a method, at most of a project. It matters a lot to me that they should seem trivial and futile: that’s exactly what makes them just as essential, if not more so, as all the other questions by which we’ve tried in vain to lay hold on our truth.”