“So first we turned off the air conditioner in the room,” Toop writes in his book, “and then we turned off the one on the second floor. Then we turned off the refrigerator and the electric cooking equipment in the adjoining cafe, the power of the multi-vision in the foyer, and the power of the vending machine in a space about ten metres away. One by one we took away these continual noises, which together created a kind of drone… Hess was very interested in this and said things like, ‘From now on maybe I should do a performance of turning off sounds.’”

what happens when an event doesn’t

Karl Marx once observed that revolutionaries, seemingly engaged in “creating something that did not exist before,” will “anxiously conjure up the spirits of the past to their service, borrowing from them names, battle slogans, and costumes in order to present this new scene in world history in time-honored disguise and borrowed language.”

Image has contents that are not what they are reported to be, Image is invalid, Image content type is invalid

Journalists were confused by the fact that nothing seemed to happen, speaking even of their boredom: “Love-In Bores Photogs” read a Chicago headline.[6] But it was a headline. Reporting a non-event event. Nothing happening was the happening. But John and Yoko were undermining the normal understanding of what is work, what is private, what is protest, and what is an event.

The residual shape is even more interesting than the shape itself. It shows where it's borders are, and shows what's beyond. In stead of focussing on the prime subject, it focusses on the subject in relation to it's surroundings.

I have several times tried to think of an apartment in which there would be a useless room, absolutely and intentionally useless. It wouldn’t be a junk room, it wouldn’t be an extra room, or a corridor, or a cubby-hole, or a corner. It would be a functionless space. It would serve for nothing, relate to nothing.

For all my efforts, I found it impossible to follow this idea through to the end. Language itself, seemingly, proved unsuited to describing this nothing, this void, as if we could only speak of what is full, useful and functional. 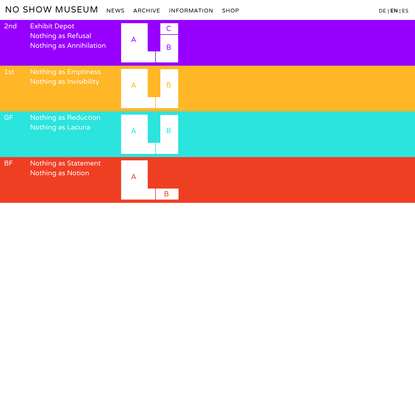