Like many SoftBank-funded start-ups, Rappi not only depends on contractors to deliver its services but also offloads its fixed costs — and the risks of the work — onto them.

The company, established in 2016 by three Colombian entrepreneurs, harnesses bike and motorcycle riders to deliver everything from flowers to cash from the A.T.M. In Colombia alone, it has 20,000 couriers.

This year, SoftBank gave Rappi $1 billion — twice as much as what the company had gotten from all its previous investors combined. In announcing the funding, SoftBank declared that the start-up, which it valued at $2.5 billion, would be responsible for “improving the lives of millions in the region.”

SoftBank’s money has helped Rappi expand into nine South American countries. And the company initially offered drivers 3,500 pesos, or around $1, for every delivery — enough to earn more than Colombia’s minimum wage of around $8 a day.

In return, couriers provided their own cellphones, bikes and motorcycles. They had to buy a Rappi delivery bag, which costs around $25. And they have to shoulder most of the physical risks of delivery.

In August, a judge in Argentina ordered Rappi and two other delivery services there to shut down until they provided workers with insurance and safety equipment like helmets. The judge said 25 couriers had been treated in Buenos Aires public hospitals over the previous month.

Rappi said it would appeal the decision, which it said “puts at risk the continuity of thousands of people’s income.” It has continued sending riders out on the streets.

In September, a survey of 320 Rappi couriers in Colombia, conducted by the University of Rosario and several nonprofits, found that nearly two-thirds had been involved in an accident on the job. Almost none were covered by insurance.

If this view of our own world is overwhelming, alien, yet nauseating familiar, it has done its work. Here is an entire ontology which forces itself on us, envelops and penetrates us, and coerces us to accept it on its own terms. Within it, the persona is merely subject to the movement of markets. This too is a map of the self, a spectaclist topography by which we navigate personal and inter-personal space. But unlike modern astrology, this system takes itself totally seriously. Meditation, exercise, and an abundance of trendy “superfoods” are frequently offered as actual ways for individuals to adapt themselves in response to the challenges posed by neoliberal capitalism. Here we find that magical thinking has not been retired, but is in full force. The notion that purchasing items with surface-level signifiers like minimalism or “fair-trade” has some correlated virtuous effect in the self is as silly of a proposition as your call getting dropped because Mercury is in retrograde.

Can we say that this world is rational? That computational devices are free of ideology or that materialism is irreligious? By now it should be obvious that we cannot. The surface-level infallibility of these ideas may be comfortable but they are neither pure nor factual. They too are just systems of meaning—social productions whose acceptance as “objective” fact are culturally determined. Retreating to self-determination and scientism allows the twisted logic of the spectacle, no more sensical than that of the mystical, go unobserved and unchallenged. The ancients believed the universe operated according to mysterious divine principle. But neoliberalism is the ultimate cabalistic regime of power. From the trivial to the highest level of abstraction, from how we hold our pencils to how we define personhood, its designs are immaculate, unknowable, unaccountable. 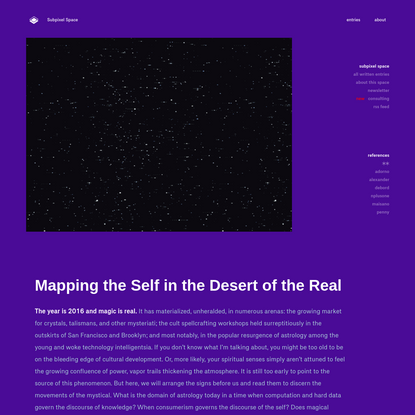 Others argued that presenting the worst-case scenario misidentifies the gravest threat. Runaway climate change is unlikely, they claimed, and our biggest concern should be doing too little, too late. The realistic danger zone could be one in which carbon emissions are somewhat curbed and the world does not reach three degrees of warming, but elites have insulated themselves from any of the still-significant impacts, leaving the poorest to bear the brunt of them.2

Commentators argued that, since this “eco-apartheid” is a more realistic vision than Wallace-Wells’s apocalyptic predictions, this is where analytic energy and public attention should focus. 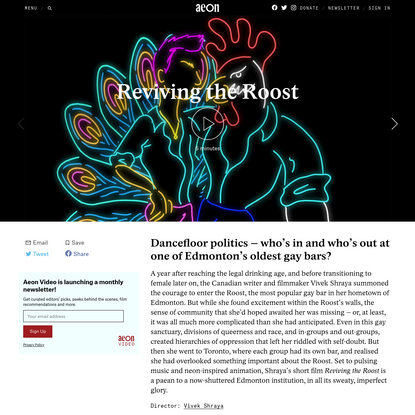 Dancefloor politics - who's in and who'…

“With that demand you guys can grow in scale ... buy more cars, and obtain higher discounts from automakers,” Varner said, calling it a “virtuous circle” for Uber and rental companies.

Despite initial fears at Uber’s arrival in 2014, rental companies including the biggest three - Localiza, Unidas (LCAM3.SA) and Movida (MOVI3.SA) - now have close relations.

“I like to say that every Monday and Tuesday, I drive to pay the cost of the car” including gas, the 23-year-old Pereira said. “And Wednesday, Thursday and Friday are for me.”

Pereira lost his job at a law firm a few months ago, joining Brazil’s 12 million unemployed. But now, with no money down, he drives full-time.

Like him, two thirds of Uber’s 600,000 drivers in Brazil do not own their vehicles, an executive told rental car executives in October. That figure, previously unreported, is one of the highest proportions worldwide for Uber.