Sextus used, among
other things, an apple as an example. To our senses it appears smooth, scented, sweet,
and yellow – but it is far from self-evident that the real apple possesses these
properties, just as it is not at all obvious that it does not possess other properties as
well, properties that are simply not perceived by our senses. 16
The question is unanswerable, because no matter what we do, we can check our
perceptions only by means of other perceptions, but never with the apple as it might
be before we perceive it. The skeptic’s argument made the philosopher’s life difficult
for some 2,000 years. 17 Then Kant added a second, even more troublesome argument.
By considering space and time aspects of our way of experiencing, he shifted them out
of reality into the realm of the phenomenal, and in doing so, he made questionable not only the sensory properties but also the thinghood of the apple. Thus, not only the
apple’s smoothness, scent, sweetness, and color are doubtful, but we can no longer be
sure that there actually exists an object such as we experience it, separated from the
rest of the world as a unitary whole or “thing.” 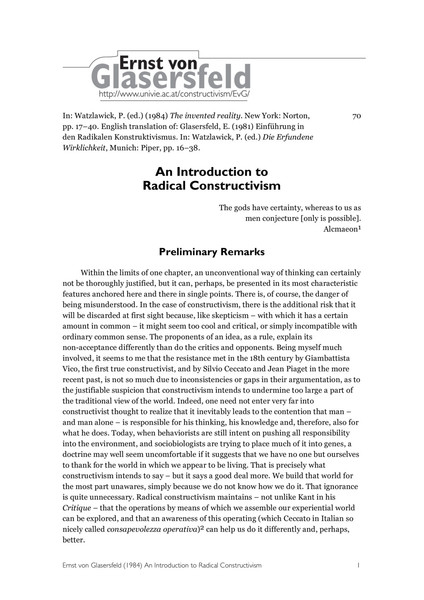 Understanding and acting are seen by radical constructivists not as dualistic processes, but "circularly conjoined"

Our knowledge can never be interpreted as a picture or representation of that real world, but only as a key that unlocks possible paths for us.

A metaphysical realist, thus, is one who insists that we may call something “true” only if it corresponds to an independent, “objective” reality.

The metaphysical realist looks for knowledge that matches reality in the same sense as you might look for paint to match the color that is already on the wall that you have to repair. In the epistemologist’s case it is, of course, not color that concerns him, but he is, nevertheless, concerned with some kind of “homomorphism,” which is to say, an equivalence of relations, sequence, or characteristic structure – something, in other words, that he can consider the same, because only then could he say that his knowledge is of the world.

If, on the other hand, we say that something fits, we have in mind a different
relation. A key fits if it opens the lock. The fit describes a capacity of the key, not of the lock. Thanks to professional burglars, we know only too well that there are many keys that are shaped quite differently from ours but nevertheless unlock our doors. The metaphor is crude, but it serves quite well to bring into relief the difference I want to explicate. From the radical constructivist point of view, all of us – scientists, philosophers, laymen, school children, animals, indeed any kind of living organism - face our environment as the burglar faces a lock that he has to unlock in order to get at the loot.

In the history of knowledge, as in the theory of evolution, people have spoken of
“adaptation” and, in doing so, a colossal misunderstanding was generated. If we take
seriously the evolutionary way of thinking, it could never be organisms or ideas that
adapt to reality, but it is always reality which, by limiting what is possible, inexorably
annihilates what is not fit to live. In phylogenesis, as in the history of ideas, “natural
selection” does not in any positive sense select the fittest, the sturdiest, the best, or the
truest, but it functions negatively, in that it simply lets go under whatever does not
pass the test.

The proponents of an idea, as a rule, explain its non-acceptance differently than do the critics and opponents.

As Gregory Bateson has stressed, Darwin’s theory is based on the principle of constraints, not on the principle of cause
and effect. 9 The organisms that we find alive at any particular moment of evolutionary history, and their ways of behaving, are the result of cumulative accidental variations, and the influence of the environment was and is, under all circumstances, limited to the elimination of non-viable variants. Hence, the environment can, at best, be held responsible for extinction, but never for survival.

Radical constructivism, thus, is radical because it breaks with convention and
develops a theory of knowledge in which knowledge does not reflect an “objective”
ontological reality, but exclusively an ordering and organization of a world constituted by our experience. The radical constructivist has relinquished “metaphysical realism” once and for all, and finds himself in full agreement with Piaget, who says: “Intelligence organizes the world by organizing itself.”