Collecting the random quotes and notes I've left myself in hope they find me again at an opportune time.

12 Followers
This channel appears in
Text Thoughts Words, personality shaping, self / more poetry is needed , and ✨ to be human

The scariest thing out there at the end of the day isn't other people - it's us.

Technology should extend our capabilities rather than highlight our limitations. It should help us manage our time more efficiently, focus our attention on the important things and foster meaningful relationships with the people we care about.

"Marketing is like a crutch. As a product guy I'd rather the product speak for itself"
— Chris Pratley

It's fun to do what you do when you know what you are doing. Unfortunately that state cannot last for long if you take your work seriously.

The problem with low hanging fruit is that it always grows back!

Great ideas are common, successful implementations are not. 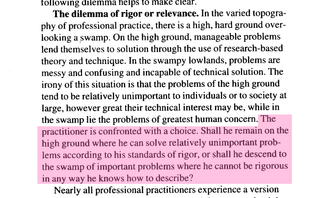 "The act of leaving something un-finished is a heavy weight around you. The act of finishing is the act of learning, of informing what happens next. [...] Finishing is an important part of the creative process."

Enough is as good as a feast.