On our ever-evolving relationship to technology. 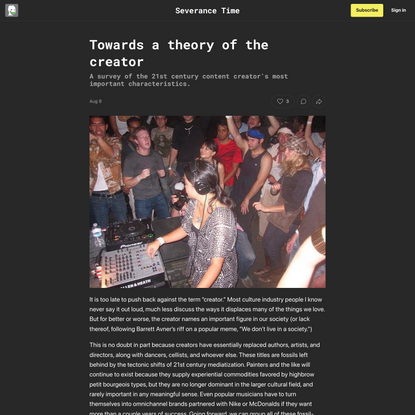 Towards a theory of the creator JOMO: joy of missing out

The luxury of anonymity

IoT: Beyond Light Bulbs and Alexa

Welcome to the Internet of Things world. Another industrial revolution that will surely overshadow all wonders of ages in the coming years. The whole world will get to hear about IoT devices transforming the way we live, drive, and farm animals and crops. However, unlike previous pivotal inventions, like the steam engines, industries won’t have to overhaul time-proven manufacturing systems and products. On the contrary, The Internet Of Things can be seamlessly integrated into already existing processes, thus giving a new cover of data-driven paint.

But despite the existing number of connected devices, we are just unfolding this new chapter. Feeling our way through and pushing the ball forward by inventing lighting control systems with nice lighting effects. But IoT limitless capabilities can create a more seismic shift in the landscape than we can ever imagine.

And there goes another but. Developing software for the cloud, like we do with the Internet of Things now, comes with inherent risks and challenges. Thus, the major pain point of this technology is its security vulnerabilities. From insecure network services to lack of device management, there is quite a large number of entry points that can result in, say, stopping the cooling system at a nuclear power plant.

Another choke point is the determinism of the network, which accounts for a delay of about 200 milliseconds or more. And whereas your fridge will be fine with that, other mission-critical applications require a rapid, almost immediate, response.

Among other things, we have to invent something better than smartphones with pathetic battery life. It would help to make a leap if power could be distributed wirelessly to IoT-powered devices from a distance, or if power sources could last at least a year. In any case, the IoT is here to stay.

Most of the issues mentioned above will be fixed in a couple of years, although we do miss one puzzle piece, which is a comprehensive framework and viable business model on how to implement and monetize IoT. 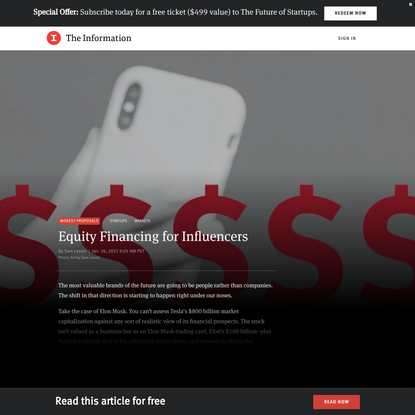 Equity Financing for Influencers
digital.life
by Seán ⠀
455 blocks • 17 days ago

Go back to the Fiefdom that I started with, and the terrible experience that are Twitter group direct messages. It’s impossible to keep your place, so if you follow a link or answer another message, you are dropped to the bottom of the thread. Of course there is no searching, and no third-party API so that someone else could do a better job. The thread also frequently fails to update in real-time, meaning you sometimes reply to questions that have already been answered, which is unfortunate because there is no way to respond to individual messages. It’s honestly awful.

And yet, we use it anyway, because that is where our friendship group formed around our shared interest in the Bucks, and it is the interest graph where Twitter has always had the potential to differentiate itself; in 2015, when it was already clear that the company had missed its opportunity to be great, I wrote in Twitter and What Might Have Been:

What makes Twitter the company valuable is not Twitter the app or 140 characters or @names or anything else having to do with the product: rather, it’s the interest graph that is nearly priceless. More specifically, it is Twitter identities and the understanding that can be gleaned from how those identities are used and how they interact that matters.

Identities — plural — referred to the many users of Twitter, but a second thing that is interesting about my Twitter group is that @benthompson is not a member; my alter-ego, @notechben is. I created that account — which, I will tell you right now, is pretty annoying to follow — so that I could tweet freely during basketball games without losing followers from my primary Twitter account. After all, just because you like my takes on tech, it does not necessarily follow that you like my takes on sports.

What I increasingly realize, though, is that separating my identities on Twitter does not mean a lesser experience, but a far superior one; social interaction in any medium is always a balance between self-expression and the accommodation of others, which means that in the analog world it is a constant struggle to strike a balance between being myself and annoying everyone around me at some point or another. The magic of the Internet, though, is that you can be whatever you want to be.

There are clear downsides to this property of the Internet, particularly on public forums like Twitter, where trolls can attack anyone, bots can astroturf any subject, and even nation-states can seek to incite civil unrest. That’s the thing, though: public broadcast mediums are Social Networking 1.0 as well.

Remember that the key characteristic of v1 digital products is that they simply copy what already exists offline. For Facebook that meant digitizing connections between friends and family, and for Twitter it meant broadcasting conversations as if you were sitting at a bar. Such literal translations, though, have limits: Facebook soon found it necessary to augment content from friends and family with professionally produced content from publishers, while public Twitter conversation has disappeared in the face of performative putdowns and political proclamations. The problem is that digital makes analog goods worse: a lot of what your friends and family believe is boring or objectionable, and conversations constrained by the geography of a bar simply don’t translate to a worldwide audience.

What truly makes a category is v2: products that are only possible because of the unique properties of digital. That, for example, is why TikTok is such a threat to Facebook’s hold on attention; again from The TikTok War:

While it is easy for users to create text updates, and, with the rise of smartphones, even easier to create pictures, producing video is difficult. Until recently, phone cameras were even worse at video than they were photos, but more importantly, compelling video takes some degree of planning and skill. The chances of your typical Facebook user having a network full of accomplished videographers is slim, and remember, when it comes to showing user-generated content, Facebook is constrained by who your friends are…

ByteDance’s 2016 launch of Douyin — the Chinese version of TikTok — revealed another, even more important benefit to relying purely on the algorithm: by expanding the library of available video from those made by your network to any video made by anyone on the service, Douyin/TikTok leverages the sheer scale of user-generated content to generate far more compelling content than professionals could ever generate, and relies on its algorithms to ensure that users are only seeing the cream of the crop.

Meanwhile, on the other extreme, public broadcasting by default — whether that broadcasting be to the entire world, as on Twitter, or to all of your friends and family, as on Facebook — actually constrains your ability to communicate, because you run into the conflict I described earlier: your “whole self”, versus others’ only somewhat overlapping interests.

This is where messaging is a much more natural fit, and, as far as the depth of your network is concerned, messaging services are just as much a threat to v1 social networks connectivity as TikTok is to Facebook’s hold on attention: I can simultaneously be a Bucks fan with the Fiefdom, a tech enthusiast with my Slack group, explore ideas with my WhatsApp group, and talk politics with my trusted friends. The fact that I am not my whole self in any of these groups is a feature, not a bug, and one that is uniquely made possible by digital.

Facebook, despite its immense success, has been far more attuned to the inadequacies of its social networking model than Twitter has, and has been pushing aggressively to adapt its products to a v2 world. That includes its shift to emphasizing Groups in 2017, and its focus on messaging, including the spin-out of Messenger, the acquisition of WhatsApp, and its attempts to unify the messaging experience across its platforms.

Even that, though, suggests that the company can’t entirely escape its roots: having one identity is a core principle for Facebook, which is great for advertising if nothing else, but at odds with the desire of many to be different parts of themselves to different people in different contexts. Twitter, meanwhile, is unlikely to ever recover from its missed opportunity to dominate the interest graph.

Instead, the role for both products will be as a bridge between attention-focused products on one side, and private interest-defined trusted groups on the other.

Their networks still have value, but primarily as a tool for distribution and reach of content that will increasingly be created in one place, and discussed in another.1

This, needless to say, doesn’t seem like much of a monopoly, certainly not one worth reaching back in time to retroactively change the rules of the game. What is encouraging, though, is that this view also gives hope for the seemingly hopeless climate that has been fostered by v1 social networks. The problem with forcing everyone to be their “whole selves” for the world, whether they want to or not, is that it becomes strikingly difficult to find common ground. After all, there is always something about everyone that is annoying or off-putting.

On the flipside, to the extent that v2 social networking allows people to be themselves in all the different ways they wish to be, the more likely it is they become close to people who see other parts of the world in ways that differ from their own. Critically, though, unlike Facebook or Twitter, that exposure happens in an environment of trust that encourages understanding, not posturing.

This has been the case for me: I am in private groups with plenty of folks that I disagree with about a whole host of things, but because we share a common interest, and are ok being trusted friends on that vector, I have learned a lot about why they believe what they believe about a bunch of issues. I think it helps my analysis, and I think it makes me a better citizen. That certainly isn’t our expectation of social media today, but that is because we are stuck on v1. 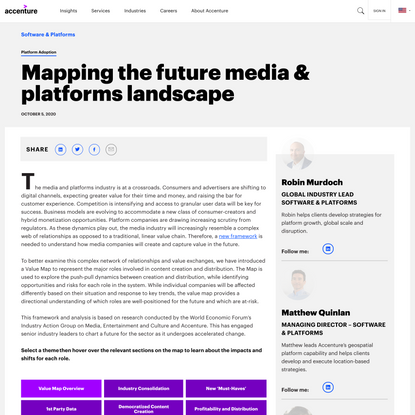