“You have people walking around with all the knowledge of humanity on their phone, but they have no idea how to integrate it. We don’t train people in thinking or reasoning.”

― David Epstein, Range: Why Generalists Triumph in a Specialized World

Smartphoning has supplanted daydreaming. Fixated on our little, lit-up screens, dusty old thoughts no longer slip out of our brains as easily, so no new, silly, absurd thoughts slip back in. And all good ideas start out as silly, absurd thoughts. Turn off your phone. Daydream. Fart around. Ponder. Let something odd fly in that’s floating around, hoping for an open mind to land in. 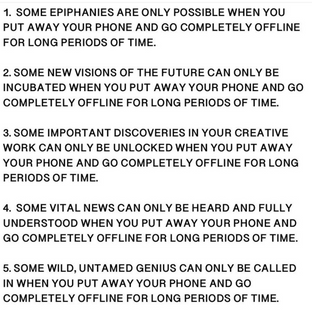 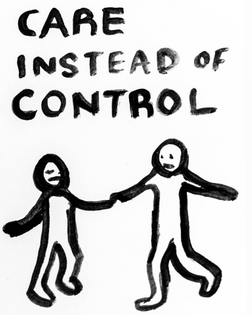 CARE INSTEAD OF CONTROL

Become comfortable with the fact that you have needs. It's OK to need. It means you're human. You have to develop an internal language of need which allows you to see your own dependency graph clearly. It is only when we are comfortable with our own state of neediness that we can communicate it clearly and honestly to others without projecting the expectation that they will necessarily satisfy us. Here, in truth, is the rock bottom foundation of all courageous, honest, horizontal, long-term conversations.

And certainly I want to have meaning and evoke meaning. I love difficult poetry and I’d love to write difficult poetry, but it’s just not the way I sing. But if we are not confronted with something difficult, then there isn’t a place to grow.

Modern, conventional science has long presumed to observe the natural world from a detached position entirely outside that world. And the science of “ecology” inherited this presumption from the older sciences that preceded it — the assumption that we could objectively analyze the interactions of various organisms and their earthly environment as though we ourselves were not participant in that same environment, as though our rational minds could somehow spring themselves free from our coevolved, carnal embedment in the thick of this ecology in order to observe it from a wholly detached and impartial perspective. In high school biology class, we gazed at a complex diagram of the local ecosystem drawn on the flat blackboard, but of course we did not include our own gaze within the system. Later, some of us learned to model particular ecosystems on the flat screens of our computers. Although I learned a fair amount from such exercises, the primary lesson I learned was that earthly nature is an objective, determinate phenomenon that can best be studied from outside, not an enveloping mystery in which I am wholly participant.

Such is the view of nature that we perpetuate when we neglect, or overlook, the depth dimension of the world — the fact that, in truth, we only ever experience the actual world from our embodied, two-legged perspective down here in the thick of things. Since we are entirely in and of this earthly world, nature can disclose certain aspects of itself to us only by concealing other aspects; we never perceive the whole of any earthly phenomenon all at once. Because we are animals immersed in the world, each thing we directly encounter meets us with its own depth, its visible facets and its invisible facets, its closer aspects open to our gaze and its more distant aspects hidden from view. The belief in a purely objective comprehension of nature, in a clear and complete understanding of how the world works, is the belief in an entirely flat world seen from above, a world without depth, a nature that we are not a part of but that we look at from outside — like a God, or like a person staring at a computer screen.

Deep ecology – or rather, depth ecology — calls this presumption into question; it suggests that such cool, disembodied detachment is itself an illusion, and a primary cause of our destructive relation to the land. It insists on the primacy of our bodily embedment in the encompassing ecology, on our thorough entanglement within the earthly web of life. It suggests that we are utterly immersed in, and dependant upon, the world that we mistakenly try to study, manipulate, and manage from outside.