digital self is no longer fun
Addiction to novelty is the new pathology
looking for escape routes, not exactly moral righteousness for being offline

Reputation-measuring systems are a mode of social deskilling. Social media companies has an incentive to erode our natural skills of etiquette and social navigation so that we become more reliant on the companies to manage our awkwardness for us.

"Reputation systems are a mode of social deskilling"

Social class can't be undone by democratizing tastes; the material bases for class distinctions always generate new ways of expressing cultural distinctions. A "liberated" taste for pop "trash" is inescapably an expression of habitus; one can't consume pop culture in some sort of politically populist way. Consumer society gives us ample access to its particular modes of pleasure that guarantee our consent and effort in reproducing it as a system. There is no subversive way of consuming its products; subversion would consist of ignoring them. 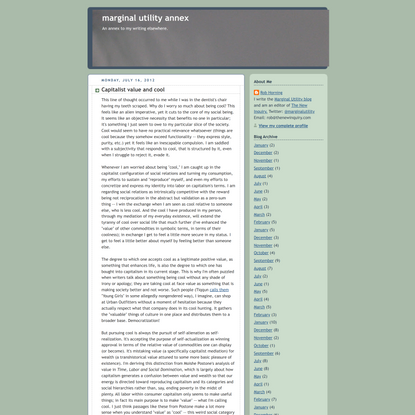 posting more can be pre-emptive. It can make users into elusive chameleons, or convey the impression that one is merely playing with identity rather than evincing some essential truth about oneself in social media. The more we say in social media, then, the less pinned-down our identity becomes. Further disclosures are meant to raise more questions, and require further elaborations, which provide more self-protection and actual obfuscation under the guise of clarifying one's self-presentation.

So while the ability to post at will lets users think they can post their way into inclusion within ever-shifting social environments, the network controls that social media place in users' hands provide them the means of exclusion and at least the fantasy that these controls can be operated with autonomy and impunity.

The implication of this is that the kind of status policing that once depended on taste can now depend on other network mappings of social space — the social graph. Its tangibility makes taste displays less significant, less determining. The boundary exists without the taste display to draw it; the online social networks can preserve it independent of the repeated demonstration of superior cultural capital. Social networks are like banks of cultural capital that way; the influence accrued can be manifest and stored in them, freeing users to behave otherwise in other contexts. It is not necessary to dislike cultural proxies in order to establish cultural capital and one's belonging to an elite group. The stakes just aren't that high with any particular cultural self-presentation or taste display. 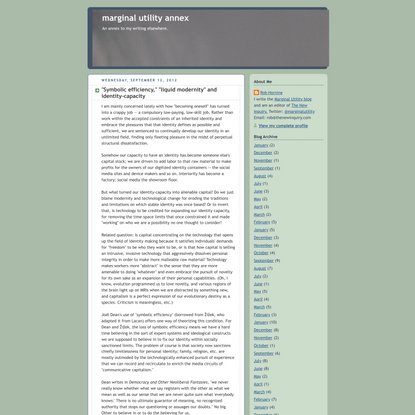 half of this channel is rob horning's writings atp

Since creativity is so closely linked with novelty, it's necessarily shallow, fixated on surfaces. This may explain our culture's current fascination with design independent of function in such things as Apple's products, Wes Anderson's films, Ikea's furniture, Target's inventory. Because evident attention has been laboriously paid to the way these things look, they seem to exude creativity, even though they often fail to provide the basic functionality we'd hope from them, as when the touch wheel on the iPod becomes acutely sensitive, or the Ikea shelf warps on the first humid day, or the hermetic Wes Anderson film meanders pointlessly without ever engaging an audience emotionally.

In Hanson's view, people "often join the crowd behind a new idea just to declare their creativity, which distracts them from really trying to make that new idea work". One's eagerness to signify one's creativity becomes a surrogate for actual innovation. This recapitulates the hipster's dilemma (and the hippie's dilemma, before), especially for arrivistes whose primary creative insight is to appear on a scene already reputed to welcome and nourish artists: By moving to the right neighborhood they signal their desire to appear creative and associate themselves with it, but they can't ever be sure if they are being creative, which, after all, is impossible to measure. Again, like Calvinists who stockpile life's finer things in hopes of shoring up their sense of themselves as elect, hipsters surround themselves with the trappings of creativity and trust that this substantiates their claim to being cool.

Thus if we want to consider ourselves one of the special creatives, we are obliged to take great pains to seem creative and must figure out just how to decorate and fly our freak flag. We have to identify the most important up-and-coming trends, seizing on them and broadcasting our choices to everyone -- wearing the right clever T-shirt, living in the appropriate zip code, dropping the names of the correct films and bands and artists and writers, carrying the newest gadgets, and make sure everybody notices us doing it. I don't know about you, but I think I'd rather cut my hair.

Creativity, from this point of view, is a lifestyle rather than a cogent expression of innovative insight; it's merely a matter of parading your nonconformity in front of a host of approving fellow nonconformists and demanding that your bosses don't interrupt your innovative and intuitive processes by requiring you to follow a dress code or abide deadlines or work according to established procedures. While it's held to provide the social benefits of innovation and tolerance, creativity predominantly serves as the intangible and thus irrefutable support for a person's self-importance -- that the world hangs in the balance as you decide whether or not to cut your hair. Creativity excuses the egotistical pose that one should be exempt from the rules that apply to the lesser people, the people not sophisticated enough to figure out that they should live in Austin and not Houston, Boulder rather than Colorado Springs, New York City rather than pretty much anywhere else.