Collaborators
Matt Wolff, and Bryce Wilner
This channel appears in
Contents, After the Plaster Foundation

Damon Rich is a designer, artist, and partner with Jae Shin at HECTOR, an urban design, planning, and civic arts practice. He has created exhibitions at institutions including the Canadian Centre for Architecture, the Museum of Modern Art, Yerba Buena Center for the Arts, and the Netherlands Architecture Institute. His work has been recognized by the MacArthur Fellowship, American Planning Association National Planning Award, Cooper Hewitt National Design Award, Center for Advanced Visual Studies, MacDowell Colony, and the 11th International Architecture Exhibition in Venice. 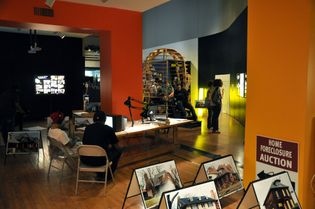 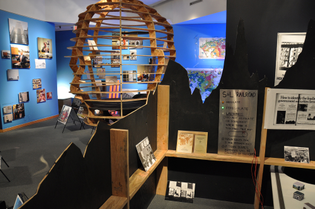 Red Lines Housing Crisis Learning Center was developed between 2006 and 2008 and posed a question about the built environment—how is it paid for?—in order to tell a story about race, class, private capital, and public power in the United States. An idiosyncratic history of American home finance realized in outsized objects, models, photographs, found artifacts, text, and video documents, it opened at Massachusetts Institute of Technology (MIT) in September 2008 in the midst of the global crisis spurred by some of its subject matter and traveled to the Queens Museum of Art (now Queens Museum) in Spring 2009.

To learn more, see Rich’s Real Estate and Liquid Architecture in the Bibliography. 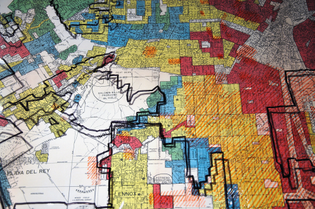 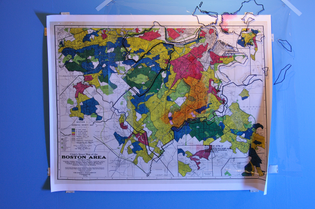 In the series Incredible HOLC, 2008, Rich superimposed data from 2006 onto maps made in the late 1930s by the Home Owners Loan Corporation (HOLC). These maps designated residential mortgage risk levels according to information including the demographic and racial makeup of a neighborhood. Green indicated “A: First Grade," the highest level of “residential security,” where banks could presumably lend freely, and red was “D: Fourth Grade,” marking the riskiest neighborhoods for lending (the HOLC maps are often thought to be the source of the term “redlining”). In Rich’s layered assemblies, areas saturated with 2006's high-cost predatory loans overlap the red zones of the 1930s, visualizing how neighborhoods that had once been starved of credit would, many years later, find themselves awash in the extractive financial opportunities that Keeanga-Yamahtta Taylor terms “predatory inclusion” in her 2019 book Race for Profit. 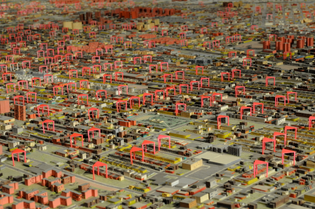 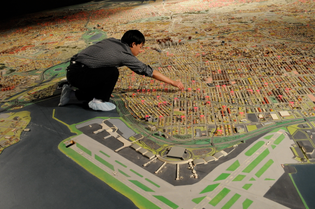 Artist and designer Damon Rich’s Red Lines Housing Crisis Learning Center focused on how buildings are paid for and political conflicts about it. Produced between 2006 and 2009, the project included exhibitions, popular education materials, oral histories, teach-in/speak-out events, and an archival preservation effort with National People’s Action. It was on view at Queens Museum in 2009 in the immediate aftermath of the 2008 financial crisis, which was driven by a collapse in the home mortgage market. Two works from that exhibition—Incredible HOLC, 2008 and Cities Destroyed for Cash, 2009—layered maps and data together to tell a history of race in the US through the lens of homeownership and forcible home loss by foreclosure.

Cities Destroyed for Cash used The Panorama of the City of New York to manifest the deep and uneven impact of the foreclosure crisis. A team of paid collaborators and volunteers marked each block containing 3 or more single-family homes that had been foreclosed in 2008 onto the 9000-square-foot architectural model. Markers were concentrated in Brooklyn and Queens neighborhoods, often those with a high number of Black homeowners. The piece’s title is borrowed from Brian D. Boyer’s 1973 book on the Federal Housing Administration scandal at HUD, an eerie and tragic forerunner of the 2008 crisis.