Misc notes Advocacy and pluralism in planning by Paul Davidoff

Paul Davidoff is an activist lawyer and planniner. He believed that in democracies, planning should be pluralistic; explicitly designed to incorporate views of different groups. Low income and minority groups need advocates — like planners acting in a similar capacity to lawyers representing clients.

He denies that planning can be value-neutral, because it's based on desired objectives, and people wnat different things. Planners, to Davidoff, should advocate for the values they deem proper. Choosing what serves public interest in a society containing many diverse interest groups is always highly contentions. Planners, who prescribe courses of actions leading to future desired states, must engage itself in the contention.

Planners needing to represent the plans of many interest groups is founded upon the need to establish an effective urban democracy, in which citizens may be able to play an active role int he process of deciding public policy.

“Inclusion” means not only permitting the citizen to be heard. It also means that he be able to become well informed about the underlying reasons for planning proposals, and be able to respond to them in the technical language of professional planners

But being isolated as the only plan maker in the community, public agencies as well as the public itself may have suffered from incomplete and shallow analysis of potential directions. Lively political dispute aided by plural plans could do much to improve the level of rationality in the process of preparing the public plan. 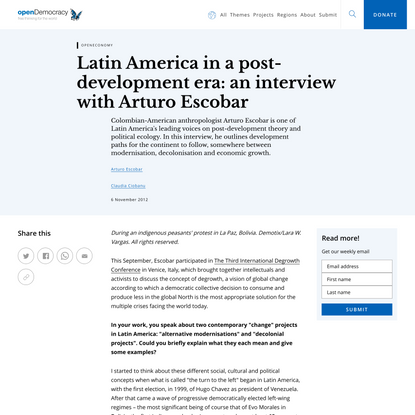 Latin America in a post-development era…