A channel exploring the concept of digital permanence, decay, memory and oblivion.

8 Followers
This channel appears in
impetus 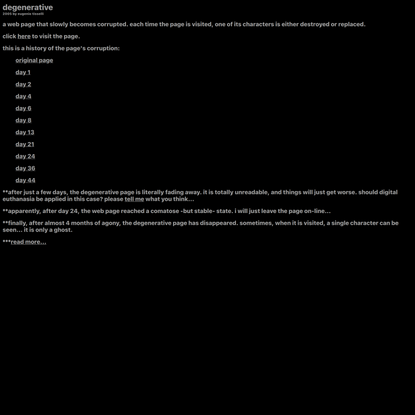 the state between appear and disappear 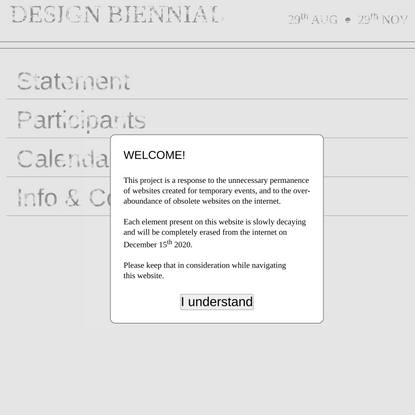 in the physical world everything is slowly decaying all the time, but maybe digital decay is binary. Therefor something digital is or it is not — it canot slowly decay.

What happens when an object is conscious of its decay? Software-enabled objects and spaces are uniquely positioned to navigate their existence from creation to disposal. We’re interested in what leads to that last bit: the decay of things that are both physical and digital.

A new pattern of wear has appeared over our world that is data rich, networked, and responsive. Decay is the output of the cycle of use and material degradation in a physical thing, but is increasingly manifest through its software, and the expectation and interactions people have with that software. This decay is taking the form of obsolescence and apathy: a world of forgotten things with short lifespans and no where to go afterwards.

This course will explore what the responsible designer can do to harness digital decay. The goal: Enable a graceful ecosystem of creation, decay, and rebirth in a software-infested and thing-saturated world. 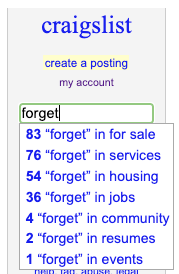 – Michael Pollan, "Cannabis, The Importance of Forgetting, and the Botany of Desire"

Luis Borges wrote Funes the Memorious, a story is about meeting a man who had a terrible accident and as a side effect he could remember everything. For a time this man was considered a genius because of his incredible long term memory. However, as time passed, he could not live his life because his mind was totally occupied by his memories. His memory was driving him insane. For him to recall one day, it took another whole day because he would remember every detail of every experience. In a sense, he was cursed with an inability to forget. When Borges returns to the man years later, he finds a man that has been defeated by the destructive nature of memory. Due to the totality of his memory, he could not live or sleep, and it ended up destroying him.

If we were to update Funes for 21st century, some version of Funes has become a reality where our external brain (internet/digitals ) remembers and archives everything. Much of the compilation of our memory is automated and not really within our control. Where instead of running out of space for new memories we’re haunted by traces of an infinite and ever growing past. We can find the origination of computer as a memory machine in the Memex. Bush suggests the information in Memex can be stored permanently, what memex offers is that information (“records”) can attain a permanency not possible before. Underlying the concept of permanent memory is that if we have control over information, if all information is stored on disk formats, and that if it is accessible, we would be saved from the burden of remembering. In that sense, control over information could give human control over the environment and even the future. In pursuit of this encyclopedic vision of the world, Bush forecasted a future where computers will augment human memory. This worldview does not provide space for contingencies of misinterpretation and misremembering, much less the possibility that information can get corrupted or erased.
The story of Funes the Memorius tells us the significance of forgetting. Forgetting is as important as the act of remembering. Forgetting enables us to remember. If we can not forget, we may soon run out of capacity to remember and also experience the world through sensory stimulations. Forgetting is a human aspect of existing in the world. Although many technological innovations focus on enhancing human ability to remember, perhaps we need to secure our capability to forget. Perhaps, this ability to forget is not our flaws, but a bliss. Essentially what makes us human.
Many engineers in the past compared computers to brain. It’s important to resist temptation of conflating the way brain and computer works (or overstating their analogy) and rather view them distinctively. On the next chapter, I’ll talk about the essential characteristics of human brain. 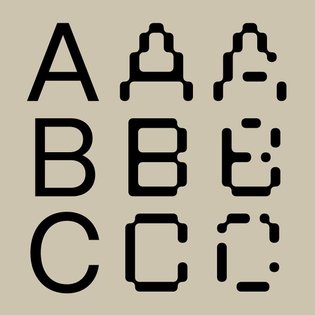