Moving towards a blog-like use of an Are.na channel as a publishing platform in its own right. Most blocks concerned with the way Are.na is used, the Are.na community, general knowledge management practice, etc.

a curated portal to the internet

Martha Graham on the channel

The hyperlink was a godsend for this reason. When I want to refer to something I’ve written before I just link to it in the text, and presto, it’s available but not too intrusive. That makes it possible to “import” a set of ideas much like you can import a code library when programming. With this mechanism increasingly advanced structures can be built. Imagine how it would cripple software if we could no longer reuse code like this. Well, that’s where ordinary journalism is right now[8]. So they become boring to theoretically-minded people who do read a lot and want something more.

"One of the things that made his Zettelkasten or slip box (or note card file) so intriguing to the larger (German) public was a 1981 paper, entitled "Kommunikation mit Zettelkästen. Ein Erfahrungsbericht" (Communication with Index Card Systems. An Empirical Account. [...]) Luhmann claimed that his file was something of a collaborator in his work, a largely independent partner in his research and writing. It might have started out as a mere apprentice when Luhmann was still studying himself (in 1951), but after thirty years of having been fed information by the human collaborator it had acquired the ability of surprising him again an again. Since the ability of genuinely surprising one another is an essential characteristic of genuine communication, he argued that there was actually communication going on between himself and his partner in theory.

Luhmann also described his system as his secondary memory (Zweitgedächtnis), alter ego, or his reading memory or (Lesegedächtnis)." 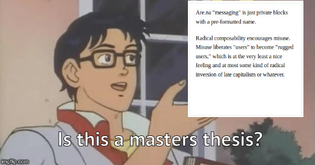 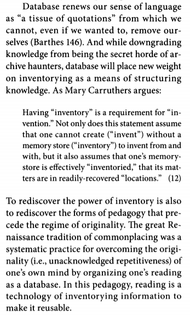 Relational frame theory argues that the building block of human language and higher cognition is relating, i.e. the human ability to create bidirectional links between things.