Study about memory, storage, computation through the lens of progressive gender and body politics. 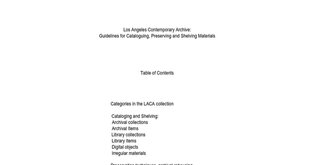 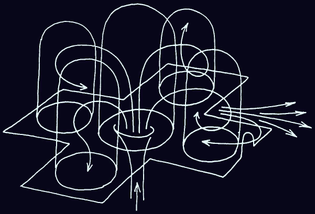 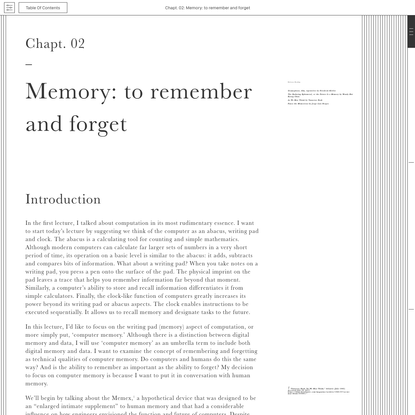 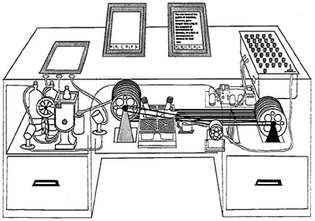 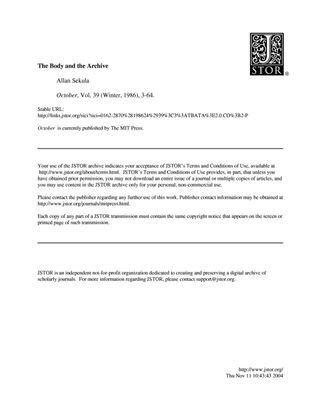 This lecture was a two-fold mash up of the critique of Memex (through Vanneavar Bush and Wendy Chun) and the concept of plasticity (through Catherine Malabou). I’d like to collect the disparate ideas back into aesthetic questions regarding computation. Computer is a giant memory machine. When we use the computer. we are, in essence, making memories of our perception, experience and thoughts. Then, what exactly distinguishes computers from other automata that repeat programmed tasks? The computer is constructed from what's called finite-state machines. A finite-state machine is an "abstract machine that can be in exactly one of a finite number of states at any given time. Computer memory is physical, even at the signal level inside of digital electronics. Contrary to Bush’s vision, computer is an unreliable memory machine. As much as the computer remembers, it tends to forget as well. Indeed, Chun writes memory always disappears, digital or physical.

If computer memory is like anything, it is like erasable writing; but, if a penciled word can be erased because graphite is soft, a computer’s memory can be rewritten because its surface constantly fades.”
-Chun.

Computer memory(Data) is a thing, an object. And it holds the constraints of all objects. All computer memory is just electrical charges held momentarily, in some complex weave of circuits. Also, all computer memory, is stored in some storage, on a physical hard disk or in the cloud, which is also a physical hardware located someplace else. In a sense, digital memory resides inside of physical storage.

“All data, from dutiful Facebook likes to iCloud selfies to every secret NSA database, is stored on a physical device somewhere.” - Mimi Onuha https://fivethirtyeight.com/features/what-it-takes-to-truly-delete-data/

Computer Memory is often flawed and incomplete, just like the ways it can be either temporary or permanent, or some combination of two. When we produce new content online on a day to day basis, the data tends to disappear at some point. However, even when the computer memory becomes inaccessible, there is a chance to excavate that. These life and death of data is often beyond our own control. To ensure our control over the permanent trace of our activity online, activists claim the Right to be forgotten. It’s essentially claiming that as free individuals, we should have the right to be forgotten, and have the agency to decide how our computer memory will be shared online after our death.

Luis Borges wrote Funes the Memorious, a story is about meeting a man who had a terrible accident and as a side effect he could remember everything. For a time this man was considered a genius because of his incredible long term memory. However, as time passed, he could not live his life because his mind was totally occupied by his memories. His memory was driving him insane. For him to recall one day, it took another whole day because he would remember every detail of every experience. In a sense, he was cursed with an inability to forget. When Borges returns to the man years later, he finds a man that has been defeated by the destructive nature of memory. Due to the totality of his memory, he could not live or sleep, and it ended up destroying him.

If we were to update Funes for 21st century, some version of Funes has become a reality where our external brain (internet/digitals ) remembers and archives everything. Much of the compilation of our memory is automated and not really within our control. Where instead of running out of space for new memories we’re haunted by traces of an infinite and ever growing past. We can find the origination of computer as a memory machine in the Memex. Bush suggests the information in Memex can be stored permanently, what memex offers is that information (“records”) can attain a permanency not possible before. Underlying the concept of permanent memory is that if we have control over information, if all information is stored on disk formats, and that if it is accessible, we would be saved from the burden of remembering. In that sense, control over information could give human control over the environment and even the future. In pursuit of this encyclopedic vision of the world, Bush forecasted a future where computers will augment human memory. This worldview does not provide space for contingencies of misinterpretation and misremembering, much less the possibility that information can get corrupted or erased.
The story of Funes the Memorius tells us the significance of forgetting. Forgetting is as important as the act of remembering. Forgetting enables us to remember. If we can not forget, we may soon run out of capacity to remember and also experience the world through sensory stimulations. Forgetting is a human aspect of existing in the world. Although many technological innovations focus on enhancing human ability to remember, perhaps we need to secure our capability to forget. Perhaps, this ability to forget is not our flaws, but a bliss. Essentially what makes us human.
Many engineers in the past compared computers to brain. It’s important to resist temptation of conflating the way brain and computer works (or overstating their analogy) and rather view them distinctively. On the next chapter, I’ll talk about the essential characteristics of human brain.

Vannevar Bush published an essay in The Atlantic entitled “As We May Think” in 1945. In it, he details major technological developments due to the urgency of war. However, with the war over, he was concerned that these technological advancements would lead to a proliferation of information beyond what humans could reasonably manage, or manage well. In this upcoming crisis of ‘Information Overload,’ he felt it’d be impossible for us to find the information we need because there would be too much of it and no way to recall it. Bush suspected the problem not to be in the information itself but our ability to index the information. Based on an insight that human mind operates on a principle of association rather than indexing, Bush came up with an abstract machine called the Memex. It’s a conceptual device with inputs, outputs and an unlimited amount of storage where information can be stored and recalled.

“Selection by association, rather than indexing, may yet be mechanized. One cannot hope thus to equal the speed and flexibility with which the mind follows an associative trail, but it should be possible to beat the mind decisively in regard to the permanence and clarity of the items resurrected from storage.”
– As We May Think, Vannevar Bush, 1945

The concept of trails is where one could add notes to information and through those notes create a trail connecting related information. Connecting information this way results in a unique spider web of data in ‘traces’ as Bush called them. The ability to link certain information to another information is the core concepts behind the Memex. In Bush’s view, the Memex machine will eliminate the need to remember everything all the time or rummage through a huge pile of things on a desk (i.e. memory) to access the needed data. This character is similar to Hypertext which is the essential characteristic of the World Wide Web. Hypertext is a very powerful way to connect discrete information with each other. As a result, reading online is very different from reading books because of this feature of contextualizing information in a dynamic way. Project Xanadu by Theodor Holm Nelson is one of the early examples of Hypertext project.

“As We May Think” was widely read at the time of publication and has served as a textbook for the generations of engineers and designers to come. Many technologists later followed Bush’s vision, often time literally, to envision and realize new generation of computers.

The most well known of these is Douglas Engelbart who demonstrated a version of ‘associative trails’ through a touch-screen like interface in 1968. Later on, movies such as the Minority Report in 2002 continue to demonstrate a version of ‘associative trails’ as envisioned by Bush. In the famous scene, the protagonist Tom Cruise navigate through a 3D interface to find an evidence.

To this day, there are many contemporary technologies that hold the lineage of Memex machines as its basic principles are integrated into the smartphones we use, self tracking devices and social media. These applications and devices are designed to, and do indeed, augment human ability to remember. With the powerful computation, humans learned to use the help of computers to remember and communicate. However the Memex presents one particular types of vision for computers, and it’s not without shortcomings.

Bush claims humans are incapable of indexing large quantities of information, hence his invention of the Memex. However, in addressing this concern of how humans can effectively access information by means of the Memex, Bush promotes a simplified vision of how human memory operates. Wendy Chun critiques this in her essay “The Enduring Ephemeral, or the Future Is a Memory”:

“In Bush’s writing, and in prognoses for the information revolution more generally, there is no difference between access to and understanding the record, between what would be called, perhaps symptomatically, machine reading and human reading and comprehension, between information and argument. The difficulty supposedly lies in selecting the data, not in reading it, for it is assumed that reading is a trivial act, a simple comprehension of the record’s content. Once the proper record is selected, there is no misreading, no misunderstanding, only transparent information. If the scientific record has not been advanced, if thought is repeated, it is because something has not been adequately disseminated.” - The Enduring Ephemeral, or the Future Is a Memory Chun

These relationships are intricately connected with one another. We, the humans, remember certain information by finding arguments around it, creating contexts for comprehension, and through repetition, understand the information. However, Bush makes a deterministic assumption about the human brain.

“In the outside world, all forms of intelligence whether of sound or sight, have been reduced to the form of varying currents in an electric circuit in order that they may be transmitted. Inside the human frame exactly the same sort of process occurs”
On the statement above, Bush simplify and conflate storage with memory in his narrative about the Memex machine. Chun argues on the fact that humans and computers access and process information differently. Human brains have characteristics of ‘plasticity’ and computers, while they can imitate the plasticity, always operates on a series of instructions. I will explore these differences through two sub-chapters, first one the concept of forgetting and second on the concept of plasticity. 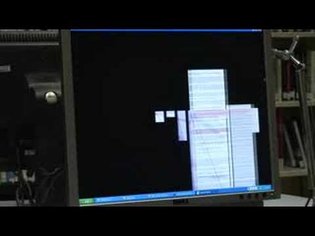