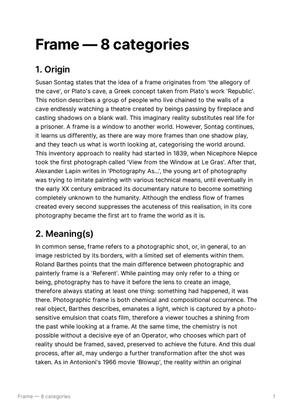 The Experimental Jetset design studio, recognisable for their minimalist style and substantial approach, created a t-shirt with text 'John & Paul & Ringo & George' in 2001, as a commissioned design for a Japanese label. Several years ago, without the group further participation or contribution, it suddenly had turned into a massive trend. The studio started to receive images of t-shirts based on their design but with different names each time, until the case along with photographs was published in 'Dutch Resource' book by Valiz Publishers in 2005. This occurrence had demonstrated the possibility of good design to go viral without the initial aspiration for popularity. Although Experimental Jetset are known for the stark visual identity of their works, the purity and accuracy of idea turned The Beatles shirt into not only a hit, but a template, which proves the universal qualities of the design that stays true to probity and integrity.

The ability and love for reading, analysing, and writing is a key skill of a conscious graphic designer. Unlike illustration, graphic design inevitably deals with textual information, transferring it to a visual form, but never — with image exclusively. An image without words and theory behind it is superficial. The era of great designers is marked by an impressive number of designers-writers, bold enough to share their views with words. Prominent designer cannot exist in a field of sheer imagery for several reasons. The first one is, only a synthesis of form and content give birth to a genuinely engaging result. Secondly, the ability to render your creative and professional practice verbally builds a foundation for a discourse around design, bringing it to political, historical, philosophical field of international agenda. Although writing and thinking are usually considered useless in terms of commercial design, as apparently words cannot help one to satisfy the client, in fact the interest towards verbal aspect develops more nuanced approach to design itself. Only with an evolved skill to evaluate, analyse, explore, and consider, you become capable of creating visual language within design that communicates the actual problems and exists in a realm of today.

What Has Writing Got to Do with Design?

The contemporary capitalist economy is marked by the need to make the most use of an individual while paying as little as possible. It eventually gave birth to several phenomenons. The first one is a multitude of free tools and cheap workers. Damping occurs when there are too many practitioners and not enough job for everyone, so the only way to survive becomes devaluing your labour to be more cost-effective than others. At a more general level, it leads the world to automatisation of working processes, including creative and cognitive ones.

When the main idea of the economy is to get the result as quickly as possible, it inevitably leads to the marginalisation of professionals and popularisation of templates, be it a literal or a metaphoric thing. Thereby the precision of approach and the beauty of visual language had lost their value, and designers turned their gazes to vernacular products.

Graphic design was heavily democratised thanks to myriads of digital tools and pop-culture. Nowadays Photoshop can be accessed by anyone, and memes became a more accurate way of broadcasting one's thoughts or even political agenda than temperate manifestos. Moreover, the naive and simple way to handle any popular topic seems more appropriate than the one of a trained designer, because all the internet speaks this primitive language of memes rather than elaborate concepts.

This postmodernist mixture of amateurish, purposeful, random and ironic lead a graphic design to the total lack of reference points, and the role of a designer diluted in the economic and conceptual muddle. Although designers with a degree may attack the works made by non-professionals, they refer to a quality that only can be evaluated by an experienced and educated practitioner, meaning — another designer. As the result, the products of graphic design are being polished and refined by designers for designers, and not desired anymore by ordinary people, who consume the work of a professional as swiftly as any meme found on Twitter. To stay afloat and earn money, a contemporary designer has to do boring and unsatisfying job, living two parallel lives of a mindless pair of working hands and a former critical thinker with a degree.

The only role that is left for a graphic designer is an intellectual one. It can either be achieved through studying or teaching at the university, an institution where debate and analysis still remain highly estimated and essential. For now, design schools serve majorly as precariat factories — they produce unprotected, unhappy designers without a real understanding of their place in a world of today. Instead, they could have been turned into something completely different — a platform for developing a new perspective on cultural labour. A place to cooperate, protect each other, define questionable notions, and develop both as individuals and as workers.

What Design Can't Do

What has writing got to do with design?

1) The designer thinks that verbal information conveying words through visuals and this is the main idea of Graphic Design.

3) Marionetti and Tristan Tzara they put the content and form as a single unit.

4) The language of the Futurist and Dadaist based on words and shapes that they own.

5) The author claims that constructive criticism should be accepted not rejected because it’s not a thing that we should be afraid of.

6) The author declares that Dutch inspiration comes from support of the autonomous industry.

7) The reason of Anglo Saxon resistance is a professional identity that connects with the industry demands.

8) The critic suggests​ two things that will help us to make our intellectual thinking like: writing and generating ideas.

What has writing got to do with design?
Session3 — Design&Audience
by Tanya Ermolaeva
2 blocks • almost 2 years ago 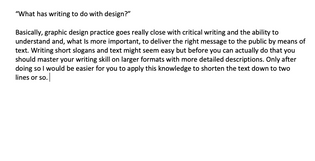 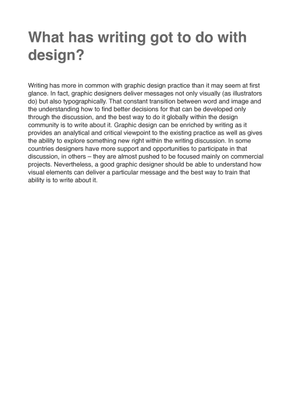 Wasting time on the internet

The internet, in particular social media and search engines have greatly influenced the way we read and write. For writers, it presented new frameworks, restrictions, and subject matter to play with, that they had never been able to encounter before. People who would not necessarily consider themselves to be writers or poets are creating new artefacts (memes and etc.) that have the same basis as poetry, but yet do not resemble the traditional understanding of the medium whatsoever.

What has writing got to do with design?

Writing is essential to graphic design as it allows the designer to have full authorship over their work. It facilitates critical discourse, and allows the designer to examine their work more closely, all the while creating a stronger bond between content and form. Despite the industry focusing mostly on commerce in some situations, designers are unable to be impartial and will always end up analysing and reflecting on the work provided to them. Thus, in order to become a stronger member of the communication process a designer should focus on bettering their writing skills.

The process of reading is wildly unpredictable, it varies from person to person and depends largely on the way this particular person perceives information. Many theories have been created due to this ambiguity, to try and understand how people interact with language. Some, like Saussure, had put forward a theory that states that language exists purely as a sound. However, typography and written language cannot be so easily dismissed. They have a much larger impact on the way people communicate with each other, by producing physical language, with infinite variations that are caused by differences in design, typesetting, and etc. Where and when a text is being read can also create an additional layer of meaning, or distort the one intended by the writer. As such, there is no concrete way of presenting a piece of writing to the reader, as there are no guarantees that it will be received the way the writer intends it.