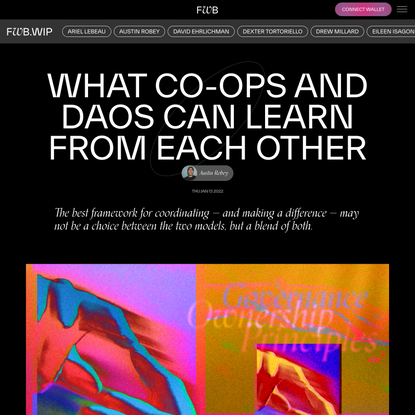 What Co-ops and DAOs Can Learn From Eac… 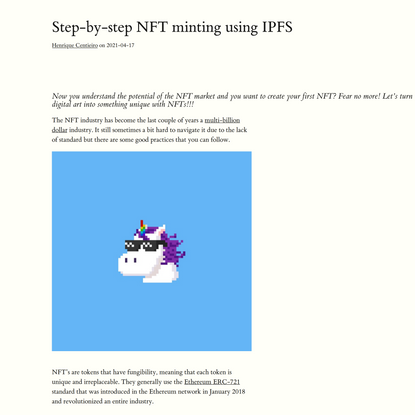 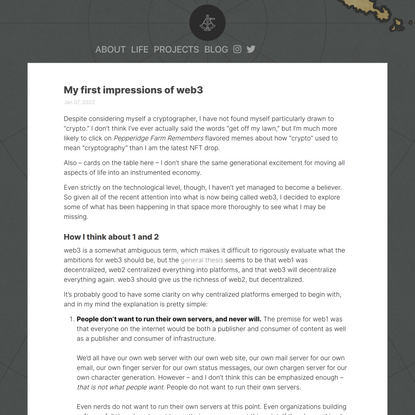 My first impressions of web3 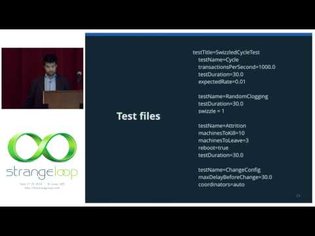 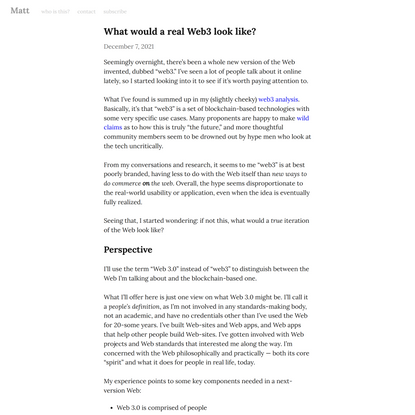 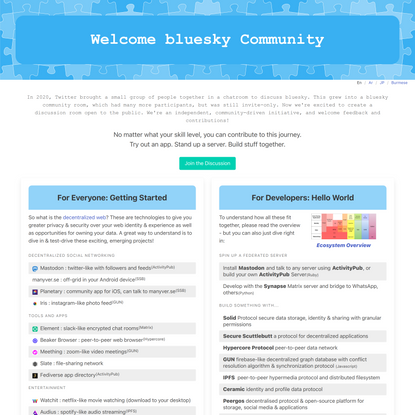 Someone mentioned Kizuna in response to me talking about the frustraition with keybase as an encrypted chat platform. I got frustraited and ranted a bit. I wanna turn this into a more formal and less chaotic essay.

My view is well before Leashless. Ceptr's idea has been on my radar since before they had their whitepaper published. It's an atomization model that isn't much different from https://medium.com/@2W/there-will-be-more-intermediaries-not-less-63a591d4c8eb

Most of Holochain's developers and team followed me on twitter ages ago. They don't have an answer for the Sybil attack problem in reputation networks (which is a superset of what the mining system in bitcoin effectively solves, and what proof-of-stake does).

Holochain isn't really even a chain in the normal sense, they're creating a reputation based decentralized ledger and claiming they've solved the cap theorem in a way that is magically somehow immune to the interloper/Sybil attack/pseudospoofing problem.

But what they're really doing is creating a decentralized identity tracking system to create a digital social reinforcement mechanism and depending on the state powers to enforce it. They can't function without 3rd party policing of license and patent rights.

A centralized reputation system ran by everyone and controls your access to resources and you're kicked off the network as a bad actor if you don't have a good reputation.

Bitcoin is centralized too on some sense of it, they ere is a global centralized ledger that everyone maintains. IT make sense for a currency, but not for a generalized reputation system.

The problem is that these reputation systems are subverted easily via manipulation, and the best case is you end up with a nation-state currency in the end, only in this case it's more directly tied to reputation systems, so you'll end up with china's credit score system, or just the same old system we have in the states. https://twitter.com/leashless/status/1065897309429538816

Your credit score already ends up being an amalgam of reputation systems. Where you live impacts your ability to get a job and changes things like what gets advertised to you https://as.nyu.edu/content/dam/nyu-as/econ/documents/2019-spring/Do%20Neighborhoods%20Affect%20Credit%20Market%20Decision.pdf and hypothetically if I had access to enough of this data, I could predict your mental health. https://www.medpagetoday.com/neurology/dementia/89931

This is where it gets insidious. People are going to be forced to divulge their reputation scores to get access to various services.

Which is why I blocked all of the Holochain types. (my twitter is deactivated ATM, but I'll be reactivating it early march).

I'm autistic and my obsession is how ants do collective decision making. This is fundamentally a different lens to take on reputation based on information theory and game theoretic forces. Leashless derived his idea from social dynamics.

Mine comes from a different direction entirely.

They're literally building the neighborhood reputation systems https://forum.holochain.org/t/reputation-vault-neighbourhoods/2849 and hyping it up like it's a good thing. This is how you get decentralized social credit systems https://en.wikipedia.org/wiki/Social_Credit_System that you can't stop.

What's going to happen is people will be using it to track OTHERs without their consent just like we are doing now with all the surveillance capitalism. It disgusts me.

and the cult of Holo just waves their hand and ignores these plights.
In social spiders, the spiders will eat you if you don't play well with the group. In ants, if you don't play nice you don't get access to the community's shared immune system that the distribute via their Trophallaxis mechanism. In social bee colonies, you literally freeze to death or are unable to defend against marauding wasps.

I've predicted that wasps, ants and bees are able to detect faces as a form of identity and memory based reputation. There was a study on it in 2011 that I read and I predicted the more modern findings https://www.sciencemag.org/news/2021/01/humans-wasps-seem-recognize-faces-more-sum-their-parts just from applying my mental models of resource contention and status signaling as a form of reputation management.

There is a lot behind my thinking.

China's system is actually closer to the west's myriad of overlapping credit scoring system https://www.wired.com/story/china-social-credit-score-system/ and isn't much different except in implementation. I do not want this kind of system as a centralized monstrosity, or as a decentralized one. It will be abused by bad actors.

The western lens on these systems is ignorant. we don't realize we're building the exact same machinery because most of us have been feed propaganda about how it works.

Punishment among social creatures is called "policing". In ants they will literally hold down another ant to cause them to starve so they will abort their pregnancy if they risk the colony. https://www.youtube.com/watch?v=SW9D6ea4d5A

In some ant and bee colonies, they use a flowers and nutrition to effectively chemically castrate the worker drones via epigenetic signaling effects of their microbiome.

This is all decentralized reputation driven.
You have to be an elite to breed or be given access to resources.
https://twitter.com/leashless/status/980004518648844290

These ad-hoc reputation systems enforced via currency is the same thing as the ants and bees.
https://www.vox.com/the-goods/2018/11/2/18057450/china-social-credit-score-spend-frivolously-video-games

Bees will literally remember reputations and eventually kill other bees who drink too much alcohol because it endangers the hive. https://www.youtube.com/watch?v=AbXJunKCq60
The key to understand is that this stuff is a spectrum. You get lone ants and bees, semi communal, full communal with policing, and then entire super organisms. But they are all driven by these underlying reputation system. All ants and bees have the capacity to detect identity of the others.

We even see this in social spiders. Their expression and relationship toward others varies even among the same species! https://www.voanews.com/science-health/study-finds-even-spiders-get-grumpy-when-theyre-alone-too-long
I've been thinking about this for years, here's a YouTube video link I posted in 2014 on reddit https://www.reddit.com/r/ants/comments/2p100i/wild_city_of_ants_national_geographic_documentary/

(you can watch a live copy here) https://www.youtube.com/watch?v=QfMtivXiQLM

And my ideas I use to model these super-organism systems are being proven by max plank & Santa Fe institute as we speak https://www.cs.unm.edu/~wfvining/lbsb_flyer.pdf https://www.quantamagazine.org/what-is-an-individual-biology-seeks-clues-in-information-theory-20200716/

It applies to human systems.

The problem is that all of the Holochain people are focusing on the tribal communities and local communal credit (mutual aid) and aren't thinking about how these systems scale and interact. All currencies in existence stem from an evolution out of mutual aid. They're just pouring fire on to the upstream systems and make it electronic.

I'm literally making predictions about how white adipose tissue impact the immune system with my models of energy storage, resource density, risk, and cost because at a fundamental level the immune system and most of biology work this way. All the chemical pheromones' in ants are effectively emergent measurements, it is all localized system. And it is analogous to immune function chemicals. Cells of our body literally have a sugar on their surface that acts as a costly signal akin to a proof-of-host. And this too is circumvent-able. https://www.myelomacrowd.org/sugars-smoke-screen-and-cancer-cell-immunity/

They are missing the forest for the trees.
The memory of immune cell signatures in our body is literally a reputation based system. This is directly relevant to my health and is my current obsession because I'm trying to figure out how to stop my immune system from eating my myelin (multiple sclerosis).

And it's working. I am able to regrow my myelin because of it and have mostly overcome it. All derived from applying these ideas to energy homeostasis. https://www.ncbi.nlm.nih.gov/pmc/articles/PMC4400287/

So I don't say it lightly... but Holochain people are fools. Leashless doesn't even understand how foolish they are, though he sees the writing on the wall.

Reputation is good and mutual aid is good. These are great ideals! These are functional and useful and I fully support that idea.

Vinay knows this. Because he is building a similar system. The Matterium system if applied to people-as-property ends up being the same thing. He wants to be able to track food supply chains to prevent one government from pulling weird economic games and end up starving groups of people.
https://twitter.com/leashless/status/189386561069133825

But at least he isn't deluded with some hippie grandeur about a utopia :(

You have to think deeper on the impacts of Holochain to really see where the problem is. https://twitter.com/leashless/status/171699940643446786

-> "I would love to know your reputation, so I can use it to steal your resources." would be how this works in practice

This is the Sybil attack problem I mentioned earlier. I can relate this problem to the literal cap theorem and the speed/accuracy trade off when viewed thru a lens of risk/trust. These things seem to mathematical certainties. A mathematical proof that life is suffering. lol

Controlling who can run a Holochain node via software licensing & patent restrictions while also saying in same article "they’re not allowed to hold your data hostage". I'm uncomfortable.

Patenting of that mechanism allows you to control thru legal means which fork will be 'authorized' in that case via legal enforcement.

It's like if Vitalik patented an algorithm used in Ethereum to prevent Ethereum classic from being created.

This goes against my ethos.

What if I wanna run a fork, Holo decides it's full of "bad actors". Take my license away?

stuff like this is why I blocked and forced all the Holochain people from following me. I don't trust them.

This is trivial to reinvent if you understand how ant alarm pheromones work. Merging a DHT with a trustless/leaderless system was something I came up with in 2013 while playing with CEPH and trying to overcome the need to have a leader.

You end up hitting the byzantine generals problem for a different reason. Is there a cost with creating a new account and pseudospoofing the network?

Split brain problem will arise due to cap theorem issues on a global network otherwise.

I also think this is a fundamental trade off - seems to match my investigations in biological defenses against Sybil attacks / cheaters / parasites, and other interrelated phenomena.

Ants and immune cells use the same fundamental mechanisms as that purports to use ("randomised peer witnessing, validation, and policing"). So splitting up into different hives and autoimmune issues will arise for the same reasons as they occur in nature.

Ants solve a similar problem of decentralized death oracles by constantly metabolizing their own death scent. 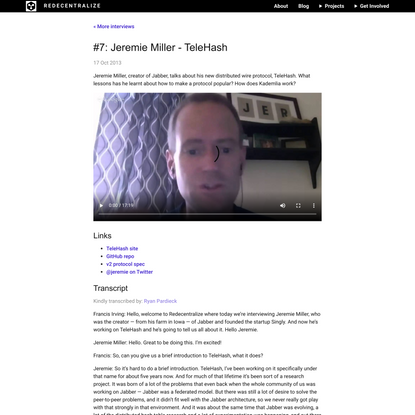 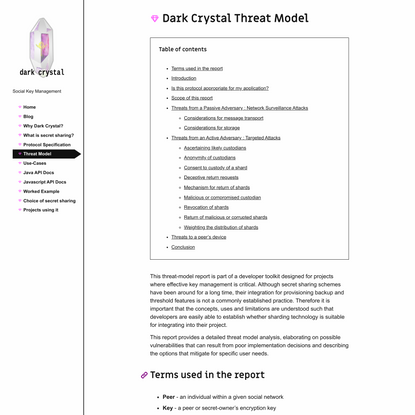