replace the idea of being 'productive' with instead being 'processive' - you cannot expect to build something new every day, you can expect to advance deeper into the process given a sufficiently strong intention

∆ David Bayles, Art & Fear: Observations on the Perils (and Rewards) of Artmaking

I’ve known for my entire adult that going for a walk is how I can think most easily. Walking is not simply moving your thinking mind (some imagined insular thing) outside. The process of walking is thinking. In fact, in his book Spell of the Sensuous: Perception and Language in a More-than-Human World, David Abram proposes that it is not we who are thinking, but rather the environment that is thinking through us. Intelligence and thought are things to be found both in and around the self. “Each place is a unique state of mind,” Abram writes. “And the many owners that constitute and dwell within that locale—the spiders and the tree frogs no less than the human—all participate in, and partake of, the particular mind of the place.”

This is not as hand-wavy as it sounds. Studies in cognitive science have suggested that we do not encounter the environment as a static thing, nor are we static ourselves.

As Francisco Varela, Evan Thompson, and Eleanor Rosch put it in The Embodied Mind (a study of cognitive science alongside Buddhist principles): “Cognition is not the representation of a pre-given world by a pre-given mind but is rather the enactment of a world and a mind… “ (emphasis mine). Throughout the book, the authors build a model of cognition in which mind and environment are not separate, but rather co-produced from the very point at which they meet. 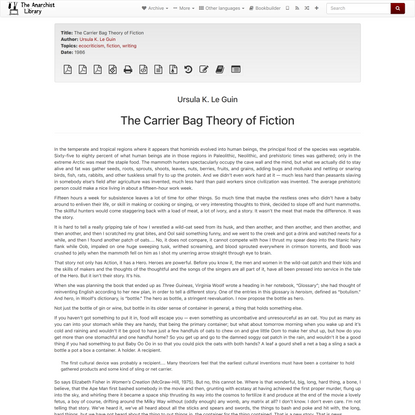 The Carrier Bag Theory of Fiction

I have noticed that when all the lights are on, people tend to talk about what they are doing – their outer lives. Sitting round in candlelight or firelight, people start to talk about how they are feeling – their inner lives. They speak subjectively, they argue less, there are longer pauses. To sit alone without any electric light is curiously creative. I have my best ideas at dawn or at nightfall, but not if I switch on the lights – then I start thinking about projects, deadlines, demands, and the shadows and shapes of the house become objects, not suggestions, things that need to done, not a background to thought.

∆ Why I adore the night, by Jeanette Winterson